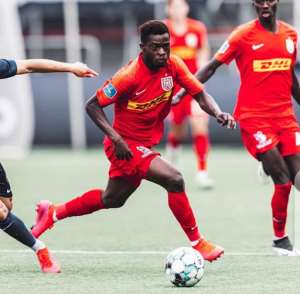 Ghana teenager, Kamal Deen Sulemana registered his name on the scoresheet on Sunday evening while in action for his FC Nordsjaelland side to help the team defeat AGF 3-1.

The 18-year old after an outstanding campaign in the Danish Superliga last season has been handed a bigger role in the team for the 2020/2021 campaign.

Today he was called into action with a starting role when FC Nordsjaelland hosted AGF at the Right to Dream Park on Matchday 10 of the new season.

Kamal Deen Sulemana displayed impressive form on the day and scored in the 3rd minute of the first half to double the lead for the home team.

He will go on to torment the defense of AGF in a game where FC Nordsjaelland eventually emerged as 3-1 winners.

Unfortunately for the talented teenager, he received a red card in the 77th minute and had to watch the rest of the match from the dressing room.

Nonetheless, Kamal Deen earned a high rating of 7.3 from SofaScore for his outstanding performances.

On the Matchday, a brace from Isaac Atanga proved crucial for FC Nordsjaelland with Patrick Mortensen netting the only consolation goal for AGF.

Speeding motorbike runs over pedestrian at Nungua
42 minutes ago

A/R: One robber shot dead, two others arrested
50 minutes ago