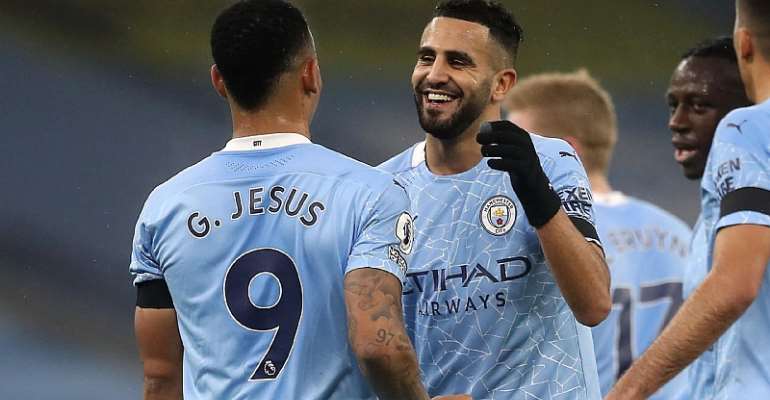 Riyad Mahrez scored a hat-trick as Manchester City returned to winning ways with yet another comprehensive victory over Burnley at the Etihad Stadium.

Pep Guardiola's side started the day in 14th having failed to score more than once in their last six league games, and without a win in their last two.

But any notion that City could be frustrated by Burnley were put to bed after just six minutes when Mahrez opened the scoring after yet another assist from Kevin De Bruyne.

City doubled their advantage in the 22nd-minute when the visitors were caught napping from Kyle Walker's throw-in with Mahrez pouncing and curling home his second.

Benjamin Mendy piled more misery on Burnley as he scored his first goal for the club with a lovely first-time volley from De Bruyne's floated cross five minutes before the break.

Ferran Torres grabbed his fifth goal of the season, but his first in the Premier League, to make it 4-0 in the 66th minute following a lovely attacking move involving Walker and Gabriel Jesus.

And three minutes later Mahrez was celebrating his hat-trick after heading in at the back post from substitute Phil Foden's deep delivery.

It was a baptism of fire for Burnley's Premier League debutant goalkeeper Bailey Peacock-Farrell, who replaced the injured Nick Pope, and the 24-year-old had VAR to thank for chalking off an unfortunate own goal as City thought they had a sixth.

It means that for the fourth consecutive meeting between the sides at the Etihad City recorded a 5-0 victory, a win that moves them up to eighth, three points adrift of the top four, while Burnley remain 17th.