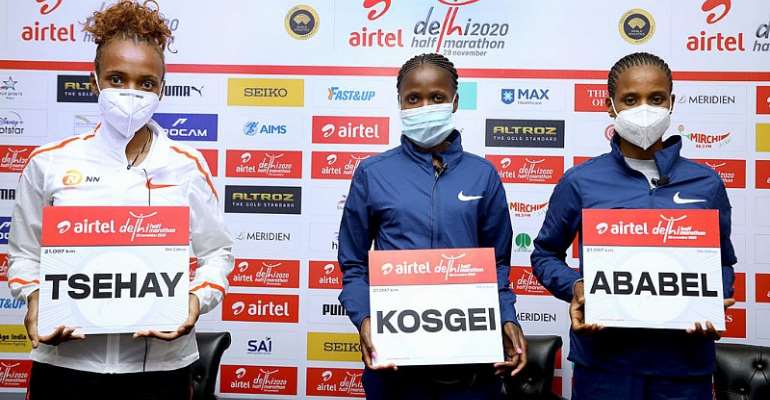 India's capital was gearing up for a half marathon but experts warned world's top athletes warming up for Sunday's event could be running a risk in the city of 550,000 Covid-19 cases and toxic air flagged as unhealthy.

Forty-nine elite runners including women's marathon world record-holder Brigid Kosgei from Kenya will take the start of the 21-kilometre race which kicks off from a city stadium.

Despite a much-needed breeze picking up on Saturday, pollution levels in smog-laden Delhi were nearly four times higher than deemed fit to breathe.

Organisers insisted they had taken all precautions for the spectator-less event but experts such as epidemiologist Preeti Kumar of the Public Health Foundation of India termed the conditions a “bad cocktail” for the long-distance race.

“Delhi's pollution and its Covid situation is definitely a bad cocktail and they would be running a risk for themselves, the community and their families by participating in this event,” Kumar told RFI.

World champion Kosgei acknowledged her concerns over the grim situation in Delhi, which has reported 550,000 coronavirus cases so far.

“We have definitely been affected by Covid-19. I had to convince my parents and family back home to allow me to visit Delhi for the half-marathon,” she said and conceded restrictions in Kenya had put the spikes in her training.

The authorities in Delhi have jacked up cash penalties by 400 percent to 22 Euros for not wearing face masks in public and said they could impose night-time curfew in the overcrowded city, which has been daily posting some 5,000 new infections over the past week.

Some slammed the organisers for maintaining the half-marathon, calling it an “irresponsible” act.

"When the pollution levels are high, when it is colder and there is a Covid pandemic, I think it is totally irresponsible to hold a marathon and give people a false sense of security," R.V. Asokan of the Indian Medical Association told NDTV.

The Indian Council of Medical Research, the country's top clinical research agency, appeared bemused by the event, which will also see defending champions Andamlak Belihu and Tsehay Gemecu of Ethiopia.

“They could have avoided it because we have to take care of our health and of others also,” Council spokesman Rajnikanth Srivastava, a scientist, told RFI.

On Sunday, Belihu will be bidding for a heart-stopping third successive title in the Indian capital.

Also on the start line will be world half marathon record holder Ababel Yeshaneh of Ethiopia.

“I am coming here looking to show what I can do after finishing fifth at the World Half, “ the athlete told reporters as health officials worked with the organisers to keep the heavily-policed route safe for the celebrity road runners.

Hundreds of amateurs are also to take part in the Delhi half-marathon but they have been told to run their favourite route and post their timing online.

“I'll be just running a park near my home as it is also a virtual event,” one runner said.

Almost all sporting events have been put on hold in India, which has 9.35 million Covid-19 cases and 136,000 deaths by a latest tally on Saturday.

"This is a very important step towards resuming competitive sport in India,” the 38-year-old ace shooter told a pre-race news conference in the Indian capital.