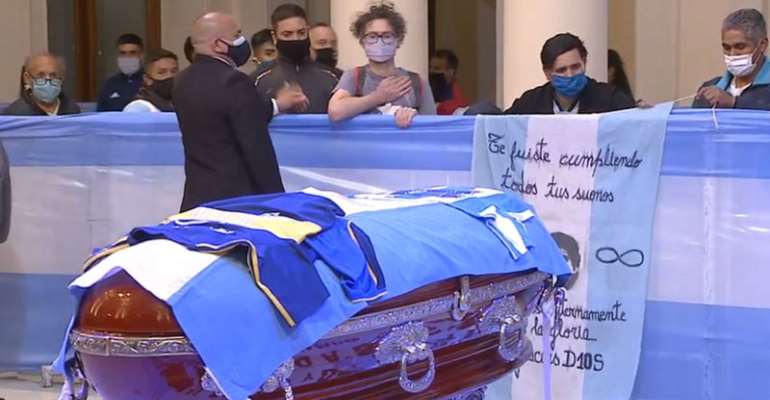 Some fans clapped, others wept, as they filed past Maradona's coffin

Thousands of fans are paying their final respects to Argentine football legend Diego Maradona at the presidential palace in Buenos Aires.

Three days of national mourning have begun in Argentina after the national hero died following a heart attack on Wednesday at the age of 60.

Some wept, others blew kisses and said prayers as they filed past the coffin being displayed at the Casa Rosada.

A million people are expected to visit his casket.
Maradona's coffin - draped in Argentina's national flag and football shift, bearing his trademark number 10 on the back - is expected to be on public display at the presidential palace until Thursday afternoon.

There were tense scenes when the Casa Rosada opened its doors, as some fans pushed and shoved against the barriers, which were lined with security forces. His family and former teammates took part in a private ceremony earlier in the day.

One of the greatest football players of all time, Maradona had a troubled personal life marked by cocaine and alcohol addiction. He had successful surgery on a brain blood clot earlier in November and was to be treated for alcohol dependency.

Local media said the preliminary results of an autopsy showed Maradona had suffered "acute heart failure". A spokesman told AFP news agency he would be laid to rest in a cemetery on the outskirts of Buenos Aires, where his parents were also buried. 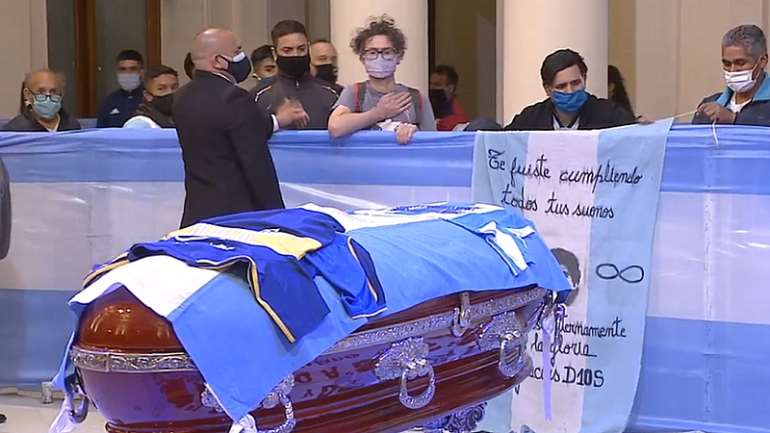 Image caption: Some fans clapped, others wept, as they filed past Maradona's coffin 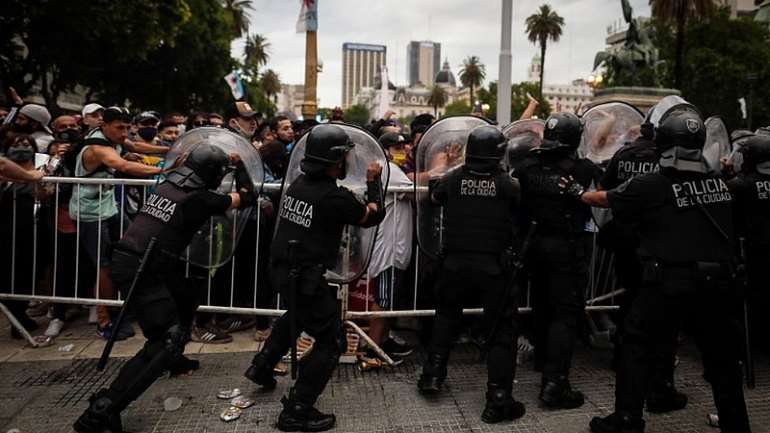 Image caption: Some fans clashed with police outside the Casa Rosada as they queued to see Maradona's coffin

The former Argentina attacking midfielder and manager died at his home in Tigre, near Buenos Aires. The last person to see Maradona alive was his nephew Johnny Esposito, according to statements gathered by officials.

Maradona is survived by five children and his former wife, 58-year-old Claudia Villafane, who he split with in 2004 after 20 years of marriage.

Maradona, who played for clubs including Barcelona and Napoli, was captain when Argentina won the 1986 World Cup, scoring the famous "Hand of God" goal against England in the quarter-finals.

To score the goal, Maradona used his hand to deflect the ball past England goalkeeper Peter Shilton, but the referee did not see it. It was one of the most controversial World Cup moments ever.

Former Tottenham midfielder Ossie Ardiles, who played alongside Maradona at the 1982 World Cup, said he was "a god" in Argentina, in Naples and all around the world.

The death has triggered an outpouring of grief in Argentina and across the world. At 22:00 on Wednesday (01:00 GMT) - an hour chosen to match the number on his shirt - stadiums across Argentina switched on their floodlights to honour his memory.

Fans flocked to La Bombonera, Boca Juniors' stadium in Buenos Aires, where many were in tears. One fan of the star's former club had tears in his eyes as he explained how much Maradona meant to him.

"Maradona for me is the greatest thing that happened to me in life. I love him as much as my father and it's like my old man died," Cristian Montelli, 22, told Reuters news agency.

"If I die young, hopefully upstairs I can play ball and watch a Boca game with him." 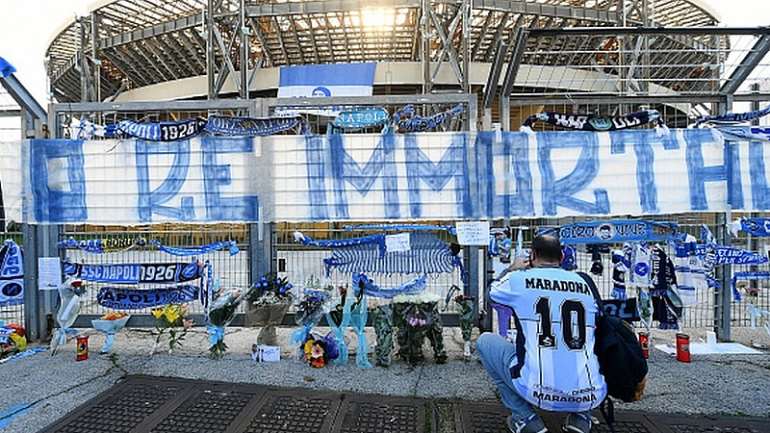 Image caption: Maradona was venerated in Napoli, where he had a successful career

On Wednesday, officials rushed to install cordons and other measures to try to limit the spread of coronavirus, as big crowds gathered on the Argentine capital's Plaza de Mayo after news of the death emerged.

Late into the night, a sea of people in Argentina shirts thronged the streets across the country to mourn Maradona's death, and celebrate his life.

Thousands of miles away in Italy, fans also gathered outside Napoli's San Paolo stadium, which was lit up in tribute to the man who scored 81 goals in 188 appearances for the club.

Fireworks erupted in the sky as those below, clad in Maradona shirts and even Maradona face masks, chanted and wept.

A minute's silence took place before Wednesday's Champions League matches and the same will happen before all other European fixtures this week.

Maradona was not just a sportsman for Argentines, he was an icon, a political player and of course, a loveable rogue. There is deep sadness as people pay their respects to their superstar footballer.

But his influence goes beyond Argentina - South Americans are proud of their footballing heritage so this news has resonated across the region.

In neighbouring Brazil, where their man Pelé vied for the title of world's best footballer, Maradona's death was headline news - much of the rivalry between the two countries can be put down to the two players, such is the passion for the beautiful game here.

But rivalry was put aside with Pelé paying tribute to Maradona as a dear friend. "One day, I hope, we will have a kick about together in heaven," he said.

His former Argentina teammate Ardiles said today's football superstars "could not even dream" of being admired as much as Maradona was.

"He will be remembered as a genius in football," he told the BBC. "You can see the extraordinary amount of interest that he generates."

When the news of Maradona's death broke, Argentina and Barcelona forward Lionel Messi led tributes, writing on social media: "He has left us but he will never leave us because Diego is eternal." 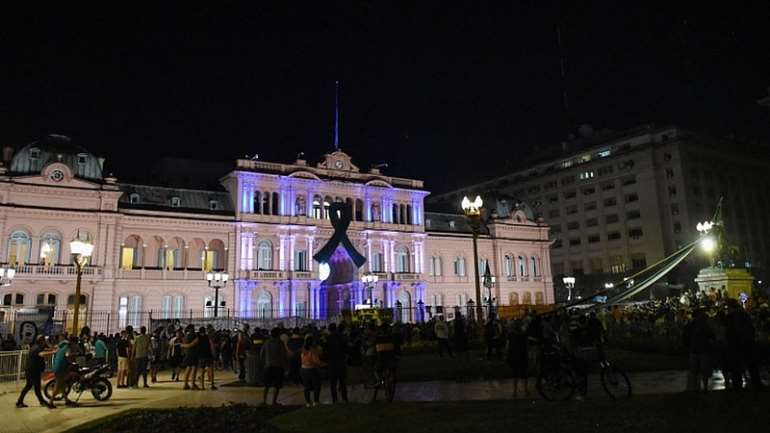 Image caption: The government says it expects a million people to visit Maradona's body at the presidential palace

Former England striker and Match of the Day host Gary Lineker, who was part of the England team beaten by Argentina at the 1986 World Cup, said Maradona was "by some distance, the best player of my generation and arguably the greatest of all time".

In a statement on social media, the Argentine Football Association expressed "its deepest sorrow for the death of our legend", adding: "You will always be in our hearts."