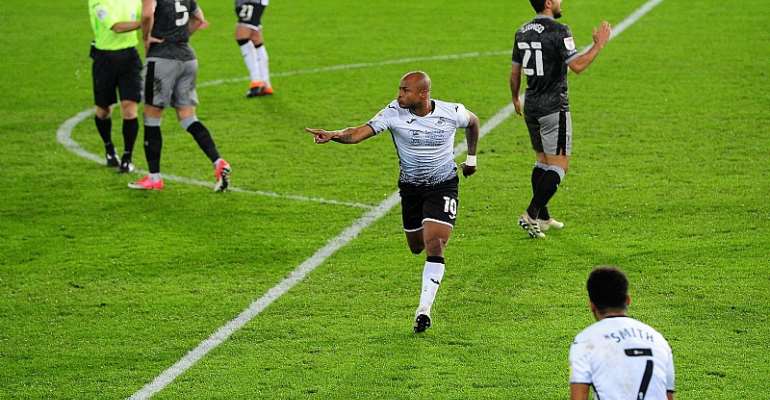 Ghana captain, Andre Ayew came off the to produce a superb individual goal as Swansea City share spoils with Sheffield Wednesday at the Liberty Stadium.

The 30-year-old has been out of action after picking up an injury in training during the 2021 African Cup of Nations [Afcon] qualifiers doubleheader against Sudan this month.

Having missed the Swansea City win against Rotherham over the past weekend, Ayew was named on the bench and was introduced in the second half of the game.

Adam Reach equalized in the first half had handed Sheffield Wednesday a 1-0 lead.

Ayew came on for Kyle Naughton.
However, the FIFA U-20 World Cup winner came on and made the difference for his side as he rescued a point for his club on the 60th minutes.

On the half-hour mark, the experienced attacker scored after he was assisted by Connor Roberts to restore parity for the home team.

At the end of 90 minutes at the Liberty Stadium, Swansea City has shared the spoils with Sheffield Wednesday.

Ayew has six goals and assists from 12 games this season in the English Championship for the Swans and they sit four with 23 points, that is four points behind leaders Norwich City.

Swansea will be hosted by Nottingham Forest on Sunday.