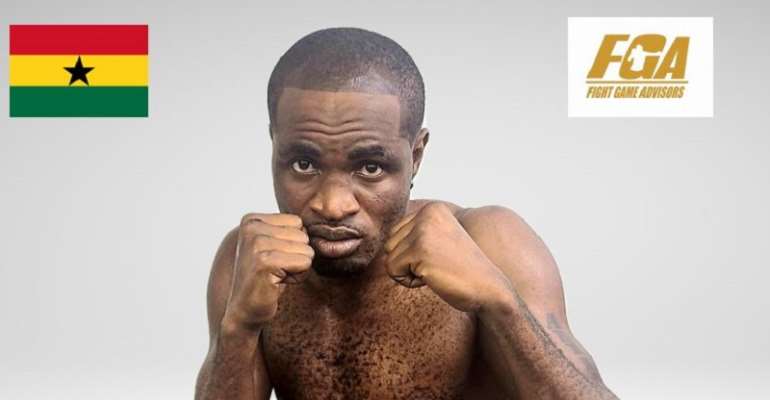 The ten-round clash is a featured bout on the undercard of the Super-Middleweight grudge match between Daniel Jacobs and Gabriel Rosado presented by Matchroom Boxing from the Hard Rock Live at the Seminole Hard Rock Hotel and Casino in Hollywood, FL and broadcast on DAZN (8:00 p.m. ET/5:00 p.m. PT).

Tagoe has been preparing for his U.S. debut having trained for the last two months at the acclaimed Sweatbox Boxing Gym in Davie, FL. He is currently world-ranked #5 by the WBO, #8 by the IBF and #9 by the WBC.

The 31-year-old is remarkably undefeated since losing his pro debut in 2004 at the age of 15.

“I am looking forward to getting back in the ring,” said Tagoe.

“I had a great training camp in South Florida with terrific sparring and excellent strength and conditioning too. We had a full camp starting last December but then my flight was cancelled in March due to COVID. I can’t wait to fight Friday!”

Said Lou DiBella, “Ghana’s Emmanuel “Gameboy” Tagoe is a legitimate top contender in the hot 135lb. division. I’m happy that he’s again getting an opportunity to prove it, against hard-hitting Mason Menard, on Friday night.”

“Emmanuel is in the best shape of his life,” said Peter Kahn. A lot of people see him rated high in the world ratings, but haven’t had the opportunity to see him fight. He is more than ready for his fight this week. He had a full training camp and is ready to shine on November 27.”

Tagoe is trained by the renowned Javiel Centeno, proprietor of the Sweatbox Gym in Davie, FL.

“After having to go back home to Ghana when his flight was cancelled back in March due to COVID-19, I was concerned that when he was able to get back into camp he would be out of shape. I was wrong. He showed up in shape and we hit the ground running without skipping a beat. Camp has gone extremely well and the entire Sweatbox team of boxers are looking forward to seeing him display his exciting, fan-friendly boxing style live on DAZN.”