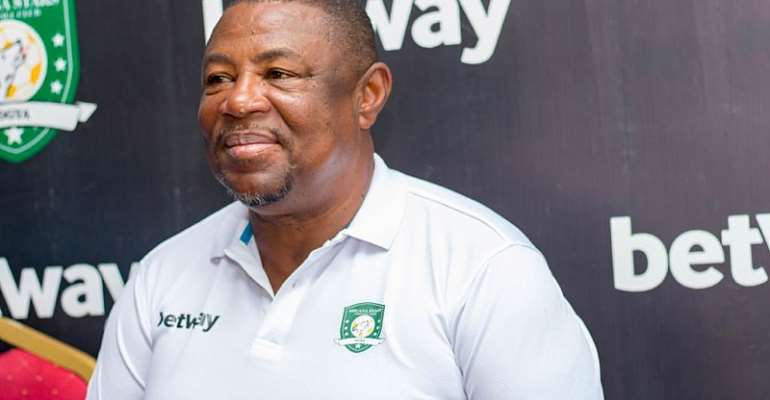 The head coach for Aduana Stars, Paa Kwasi Fabin has applauded the King Faisal team for their performance following the 1-1 draw against the side on Sunday afternoon.

Yesterday, the Dormaa-based club played as a guest to the side from Kumasi in a Matchday 2 fixture of the recently started 2020/2021 Ghana Premier League season.

Following 90 minutes of exciting action, Aduana Stars was held to a 1-1 draw by a determined King Faisal team that displayed a resilient attitude.

Speaking in his post-match interview, Coach Paa Kwesi Fabin has heaped praises on the performance of the opponent in the stalemate.

“King Faisal played really well and were the better side on the day. It is the reason I was very satisfied with the results though we were coming for maximum points,” the Aduana Stars coach said after the match.

Meanwhile, Coach Paa Kwesi Fabin has refuted talks that his team dropped points due to the fact that they had to play with 10-men in the second half. According to him, his team’s only problem is that players lacked match fitness.

“Our problem was match fitness but all in all we got a point. The red card on Isaac Kwain was a good call from the referee; he deserved to be sent off,” the experienced gaffer shared.

Aduana Stars now go up against Bechem United next weekend and will be hoping to pick up all 3 points in that home match.