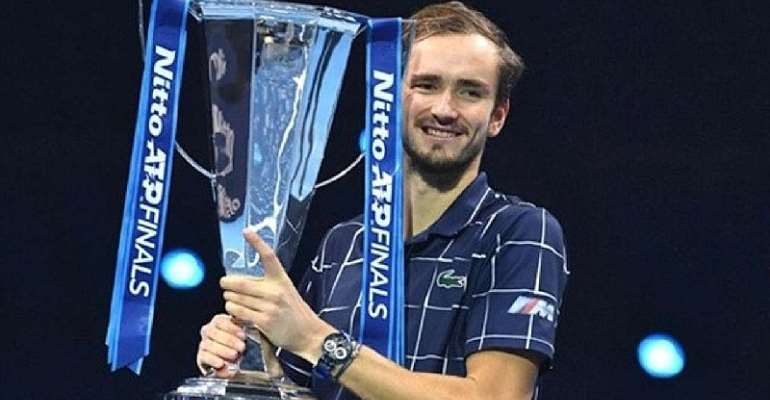 Daniil Medvedev has won the biggest title of his career after coming from a set down to defeat Dominic Thiem 4-6, 7-6(2), 6-4 in the final of the ATP Finals.

Both players defeated both Rafael Nadal and Novak Djokovic, the top two seeds, en route to the final, with the Russian having won all four of his matches at the tournament.

It was Medvedev who started the encounter more brightly, missing two break points in just the second game of the match.

The Austrian took full advantage of his opponent's profligacy, wrestling his way back from 40-0 down on the Medvedev serve to rattle off five straight points and move ahead.

Medvedev got to deuce twice in Thiem's next service game but was unable to craft an opportunity, with the 27-year-old holding firm and eventually closing out the set 6-4 thanks to a fortunate net cord.

Thiem continued to make inroads in the second set and was left screaming in frustration after not finding a breakthrough in the seventh game. Twice he missed breakpoints, once as Medvedev surprisingly came to net behind a tame second serve, once as the Russian sent down a thunderous ace.

Eventually, the second set came down to a tiebreaker. The Austrian had never lost a breaker to Medvedev but, after winning the first two points, wilted and lost seven points in a row.

Thiem was clearly affected by his missed opportunities at the start of the third and twice had to dig deep to hold serve before Medvedev finally made a breakthrough, converting his sixth break point of the set to move ahead.

Medvedev began to dominate behind his own serve and soon served out to cap a brilliant week in which he beat all three reigning Grand Slam champions to win the biggest tournament of his career.

"First of all what a match. I mean, one of my best victories, three sets against an amazing player," Medvedev said after his win.

"Dominic, congrats for what you have achieved. Your name is already in the tennis history books. You are playing unbelievable. I hope we will have many more matches to come on big occasions like this."

Thiem added: "Of course I am disappointed but at the same time I am proud of the performances all week.

"Daniil, really deserved, an amazing match. Congrats for another great year. I hope we have many great matches to come. It was a pleasure today even though I lost."

The match was the final one at London's O2 Arena, which has played host to the year-end championships. Next year, the tournament moves to the Pala Alpitour in Turin, Italy.