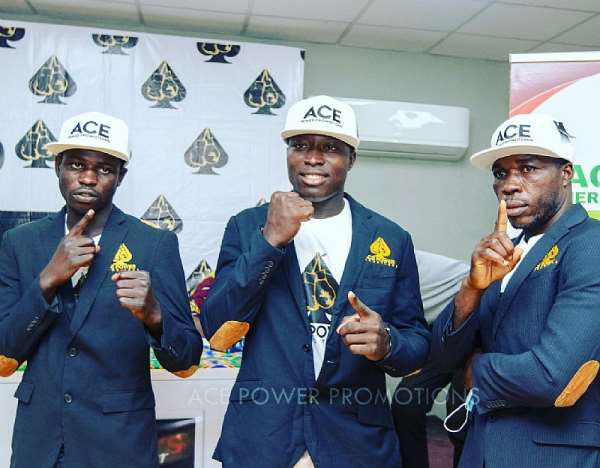 Daniel Aduku will fight Sani Yidana Kugblie in an eight-round super welterweight contest for the main bout of the night.

Aduku (11-2-1, 7 KOs) recently joined ACE Power Promotions alongside Holy Dorgbetor and Emmanuel Baidoo. All expected to make their debuts on the card.

Dorgbetor will slug it out with Billy Quaye in an eight-round featherweight contest while Baidoo faces Daniel Kotey in a six-round, super welterweight encounter.

Alex Ntiamoah, CEO of Box Office said his outfit was willing to step up and partner with other promotional banners in order to give boxers the opportunity to return to the ring and make a living.

“It is good to have boxing return and I believe fighters will take advantage of these tune-up bouts,” Ntiamoah told the media.

Aduku will be fighting for the first time in nearly two years; since he won a unanimous decision over Emmanuel Quaye in December 2018.

His opponent, Kugblie, last fought in February, suffering a knockout defeat at the hands of Nigeria’s Obinna Joseph Mathew.

CEO of ACE Power Promotions, Dr Adae Opoku Amoako, hopes the bouts will be held on a bright note. The focus, he said, is to make a significant impact domestically and on the continental stage.

“Our aim is to unearth and nurture talents for the future and to make them compete at the highest level. This is what we believe would make us a great organization.”

According to organizers, all boxers will be quarantined a week before their bouts and tested throughout.

“We are prepared to meet all COVID-19 restrictions to enable the fight to take place,” said Kizito Akudago, Legal and Corporate Affairs Manager of ACE Power Promotions.

“The bouts will be streamed live on social media with only news outlets and organizers to be at the venue.”

More boxing events are expected on national television in Ghana due to the threat of COVID-19. These events will include frequent testing of fighters and officials. The Ghana Boxing Authority (GBA) believes their protocol will allow the sport to resume shows on a regular basis during this crisis period.

“Promoters will have some financial relief from the government because the COVID-19 tests would be catered for by the government,” said Patrick Johnson, GBA General Secretary.

There is possibility of a lockdown, other restrictions – Opp...
23 minutes ago