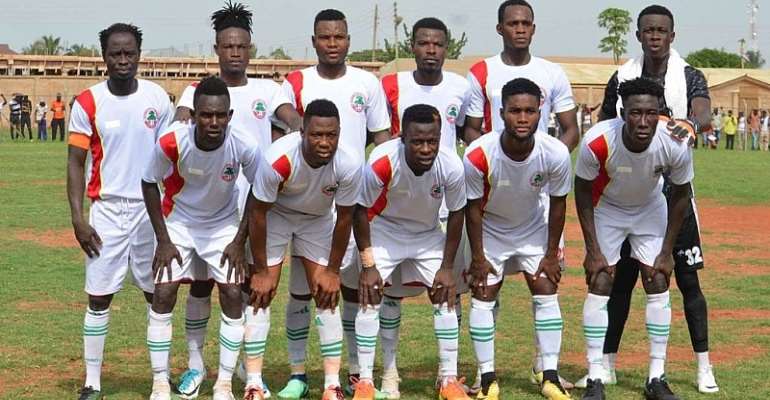 The home side started with an unchanged side that played (1-1) a draw with Kotoko in the first game. That is, J.Mooise,Jonah Aryeetey, M.Rashid, M.T.Nortey, F.Akorlor.C.Boahen,A.Boahen, F.Amankwah, I.Salifu, S.Boakye, A.Mugesse in 4-5-1 formation by Ignatius Fosu. On the flip side, Dwarfs made 3 changes to the squad that played Elmina Sharks in Cape Coat.

Simon Martey, Martin Tsiboah and Obed Bentum were replaced with Godwin Adikah, Ishmael Antwi, and Moro Sumaila in this game.

The game started with an early scare to Eleven Wonders from Dwarfs just after kick-off when a through ball was played to Moro Sumaila, with lack of concentration from the defense, he got ample time to beat John Mooise but could not as he was unfortunately denied by the post.

A counter-attack by wonders on the left flank saw a cross from F.Akorlor who found C.Boahen in the box but played a feeble shot into the hands of Razak Issah in the 13th minutes.

Just a minute after was a quick one-two between Seidu and Sumaila of Dwarfs on the right side of Eleven Wonders defense saw the ball hit the side net after Seidu played a shot from an acute angle.

In the 16th minutes, Razak came to the rescue of the Mysterious boys after a square pass from the left side of Dwarfs defense found Frank Amankwa who curled the ball into the left corner of the post but was saved by Razak Issah.

As Eleven Wonders continue to dominate play, Aryeetey surged forward and made a cross which located F.Akorlor in the penalty box of Dwarfs, with the aim of scoring, he kicked the ball which went to hit some part of the body the referee deemed it a penalty in the 30th minute.

Tetteh Nortey took to the spot and dispatched it to give Eleven Wonders the lead in the 32nd minutes. The first half ended in 1-0 in favour of the home side.

The second half started with both teams poised to attack each other. Eleven Wonders started from where they left in the first half as they controlled most parts of the game, forcing a save from Razak on the 50th minutes and Mugesse ballooning the ball in the six-yard in the 58th minutes. Prince Kpodo was sent the marching orders after receiving a second yellow card after an infringement on I.Salifu in the 70th minutes.

This forced coach Ernest Thompson to switch to back 3 with Godwin Adikah, Emmanuel Anaful, and Dennis Korsah being the back three and Amos Korankye and George Asamoah wing-backs for the last 20 minutes.

George Asamoah’s long drive after cutting in from the flanks from 30 yards forced a save from J.Mooise in the 75th minutes.

With Prince Okraku in the mist for Mugesse, he did not take long for him to find the back of the net as he taps in from a build-up from Salifu who finds Ollenu, who also sees a run from S. Boakye and lays it to him as Boakye squares for a tap in by Prince Okraku in the 90th minutes to ensure Eleven Wonders picks up the maximum points. Referee Samadji whistled after added time and it ended 2-0 in favour of the wonder boys.

Coach Ernest Thompson was exasperated by the decisions of the referee especially the penalty and admonished that the referee should be fair going forward.

Coach Ignatius O. Fosu has praised his boys and sent out a strong signal that they will fight till the end of the league.

Eleven Wonders will travel to the capital to face the scientific soccer lads (Liberty Professionals) while Mysterious Dwarfs will play at home to Berekum Chelsea in Cape Coast.