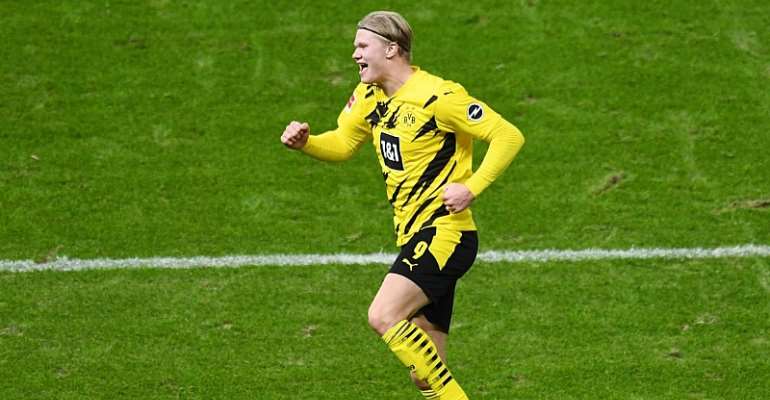 Erling Haaland celebrated being crowned Golden Boy by scoring a ridiculous four goals, including a 15-minute hat-trick, against Hertha Berlin.

Hertha were 1-0 up at half-time after Matheus Cunha opened the scoring but the Norwegian sensation went goal-crazy in the second half.

He levelled matters in the 47th minute, put Dortmund 2-1 up two minutes later and then secured his second Bundesliga hat-trick in the 62nd minute.

Not content with three, Haaland went and followed up Raphael Guerrero's strike with his fourth goal to make it 5-1 in a quite incredible turnaround in the German capital.

Ridiculously, Haaland now has 23 goals in 22 games in the Bundesliga - only Bayern Munich striker Robert Lewandowski has managed more in that timeframe.

In 14 starts for club and country this season, the 20-year-old has hit 17 goals in all competitions and developed into one of the deadliest strikers in world football.

Already at such a young age he's closing in on a century of club goals career and the fact Dortmund snapped him up for around €20 million in December is quite remarkable considering he's easily worth above £100 million now.

After his four-goal haul, Haaland was replaced by another Dortmund goalscoring sensation in Youssoufa Moukoko, who has scored 141 goals in 88 appearances at youth level for BVB.

Aged 16 and one day, he became the youngest ever player in Bundesliga history and has been tipped by to achieve great things by former Red Bull Salzburg marksman Haaland.