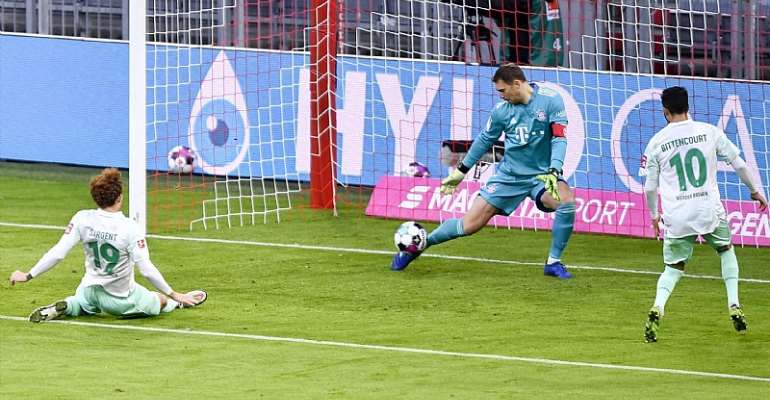 A Kingsley Coman header ensured Bundesliga leaders Bayern Munich grabbed a 1-1 draw against Werder Bremen, but have handed RB Leipzig the opportunity to go level on 19 points when they play Eintracht Frankfurt on Saturday evening.

Borussia Dortmund can go within one point of the current champions when they face Hertha Berlin earlier on, while Bayer Leverkusen, who have played a game more than Bayern, beat Arminia Bielefeld on Saturday afternoon to also close the gap to one point and blow the Bundesliga title race wide open.

But Bremen looked threatening on the counter-attack and Manuel Neuer produced a sublime double save in the 15th minute. First he denied USA international Josh Sargent with his feet before making a brilliant fingertip stop to keep out Ludwig Augustinsson on the rebound.

Bremen had another big chance on the break in the 24th minute through Leonardo Bittencourt, but he struck his half-volley into the side netting.

With Bayern unable to get past Bremen's plucky backline, the visitors took the lead on the stroke of half-time through Maximilian Eggestein. The German midfielder met Sargent's cross on the right and calmly slotted the ball past the national team's number one Neuer to give Bremen a shock lead.

Moments after the restart the lively Sargent set Milot Rashica through into a one-on-one and he should have put Bremen two up. The Kosovo international delayed in pulling the trigger and Jerome Boateng made a vital interception to ensure the 24-year-old's shot veered off course.

Douglas Costa had a spectacular left-footed strike from the edge of the box clatter off the underside of the crossbar, off the line and back out again. But Bayern did finally get their equaliser just after the hour-mark through Kingsley Coman, who met substitute Leon Goretzka’s delightful cross and nodded in his first Bundesliga goal of the season at the far post.

Bayern pressed for a winner and almost got it in the 85th minute, but Eric-Maxim Choupo Moting’s skied a seemingly certain tap-in over the crossbar from just a few yards out. Moments later at the other end, Sargent saw his near-post effort saved by Neuer as both teams were forced to settle for a point.