Mali and Tunisia qualify for Africa Cup of Nations 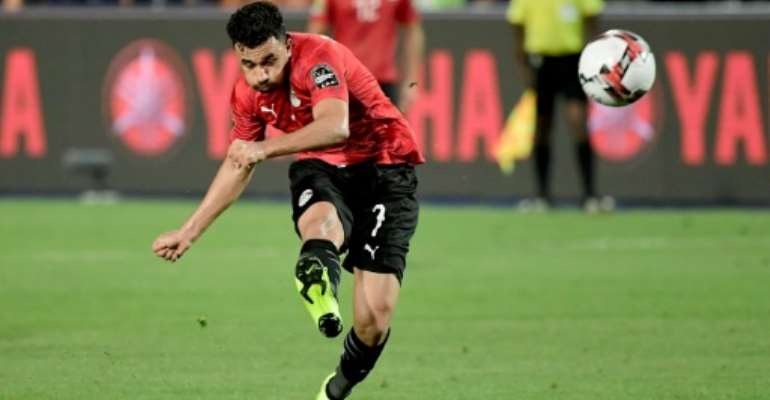 Mahmoud Trezeguet scored to complete a 3-0 win for Egypt over Togo Tuesday in a 2021 Africa Cup of Nations qualifier.. By JAVIER SORIANO (AFP)

Mali and Tunisia qualified for the 2021 Africa Cup of Nations finals on Tuesday to follow in the footsteps of title holders Algeria, Senegal and hosts Cameroon.

Another 19 places will be up for grabs during the final two matchdays between March 22 and 30 with record seven-time champions Egypt among those close to securing places.

Sekou Koita and Moussa Doumbia scored in Mali's 2-1 win over Namibia in Windhoek which clinched an eighth consecutive appearance at the African football showcase.

Tunisia will be going to the finals for a record-extending 15th consecutive time after drawing 1-1 with Tanzania in Dar es Salaam, where Saifeddine Khaoui gave them an early lead.

Neither Group A frontrunners Mali nor Group J pacesetters Tunisia are assured of winning their four-nation groups, but both are certain of top-two finishes and qualification.

Senegal clinched a place Sunday, Algeria did likewise Monday and Cameroon fill the place automatically reserved for the host nation.

Aston Villa forward Mahmoud Trezeguet scored the final goal as Egypt romped to a 3-0 Group G win over Togo in Lome, with Mohamed 'Afsha' Magdy and Mohamed Sherif also on the scoresheet.

After the dramatic four-goal comeback by Sierra Leone to force a 4-4 Group L draw in Nigeria last week, the reverse fixture provided little drama and ended 0-0 in Freetown.

A stoppage-time goal from Mohamed Abdelrahman gave Sudan a surprise 1-0 victory over Group C leaders Ghana, who were captained for the first time by fourth-choice Jordan Ayew, the Crystal Palace forward.

Injuries ruled out midfielders Andre Ayew and Thomas Partey, the first and second choice skippers, and the next in line, goalkeeper Richard Ofori, was suspended.

There's no disquiet among us over Akufo-Addo 'luxury' trips,...
28 minutes ago