2021 Afcon Qualifiers: Zimbabwe Come From Behind To Hold Algeria In Harare 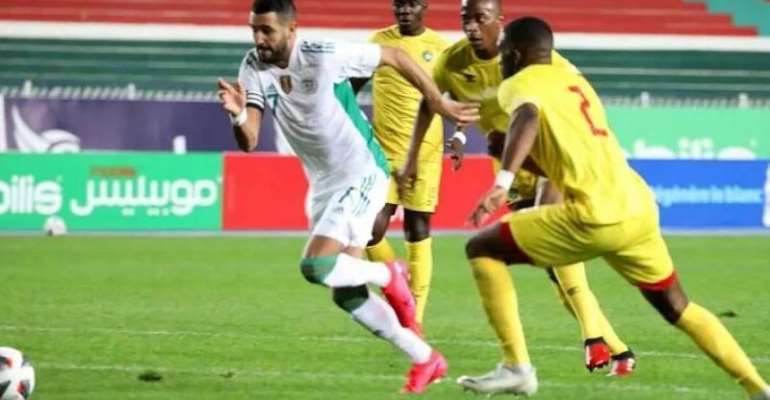 Zimbabwe came back from two goals down to hold Algeria to a 2-2 draw in 2022 Africa Cup of Nations (Afcon) qualifier at the National Sports Stadium in Harare on Monday, but the point was enough for the Desert Foxes who booked their ticket to Cameroon with two games to spare.

Goals from Andy Delort and Riyad Mahrez fired the African champions into a two-goal lead before Knowledge Musona and Prince Dube found the back of the net for the hosts. Algeria are the second team to qualify for the 2022 Afcon after 2019 runners-up Senegal punched their ticket on Sunday.

The result leaves Algeria five points clear of the Warriors in Group H ahead of Botswana's match at home to Zambia later this evening.

Algeria dominated the early exchanges and deservedly hit the front in the 34th minute. Réda Halaïmia delivered an inch-perfect cross into Delort's path and the forward made no mistake, powering home his header attempt past Talbert Shumba.

The visitors doubled their lead four minutes later through an incredible solo goal from Mahrez. Saïd Benrahma found the Algerian captain with a cross-field pass and having beat Adam Chicksen with the most audacious of first touch's, the Manchester City winger bamboozled the Zimbabwean defender two more times before driving a right-footed shot into the back of the net.

Warriors captain Musona then halved the deficit with an exquisite free-kick that whistled past Raïs M'Bolhi in the 43rd minute to make it 2-1 at the half-time break.

Khama Billiat and Divine Lunga were introduced after the interval and Zimbabwe continued to improve as the match wore on.

Tino Kadewere forced M'Bolhi into a top save in the 56th minute as the hosts continued to turn the screw and the equaliser finally came in the 82nd minute. A corner-kick was flicked on at the near post and into the path of Dube who directed his shot straight at M'Bolhi but the Algerian goalkeeper could only succeed in bundling the ball over the line.

In the end, the two teams settled for a point apiece as Algeria extended their unbeaten run to 22 matches. The two teams will return to Afcon qualifying action in March.

I haven’t said NPP is Majority in Parliament – Bagbin clarif...
30 minutes ago