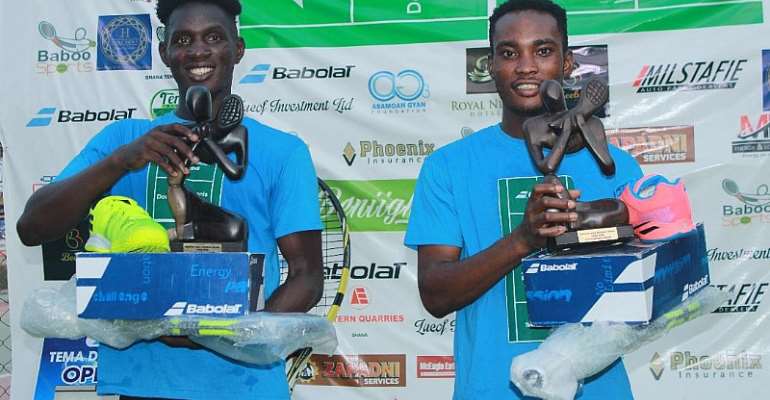 The Osu duo ( Acquah and Totimeh) opened a 4-1 lead, maintained their composure and won the set with four breaks. In the second set, Bagerbaseh and Mbanu fought back from a set down to win the tiebreak 7-6(4).

Top seed Johnson Acquah and Totimeh raised their game during the super tiebreak. At 10 all they held their serve to 11-10 only for Mbanu to double fault his serve. Speaking to ghanatennis.org Acquah and Totimeh said, "we are excited about winning because we have been looking forward to winning our first doubles title."

2008 Ghana's Davis cup duo Albert Arthur and Raymond Hayford showed their superiority in the men's social 1 finals with a 6-1,6-2 win over Prince Ablorh and Seth Mingle.

According to tournament organizer, Ismaila Lamptey, this year's Babolat Tema Doubles Tennis Open has been one of the best tennis events so far since the inception of Tema Babolat Doubles Tournament in 2013.

Over close 200 tennis players registered and what made it even more special was the inclusion of Wheelchair Tennis Category.

He added that, the level of competition was very high as compared to the previous years. The general dedication and commitment of all registered players was mind-blowing. Some players had to stay to finish their matches at 9:45pm and reported early morning by 7am to continue with their matches.