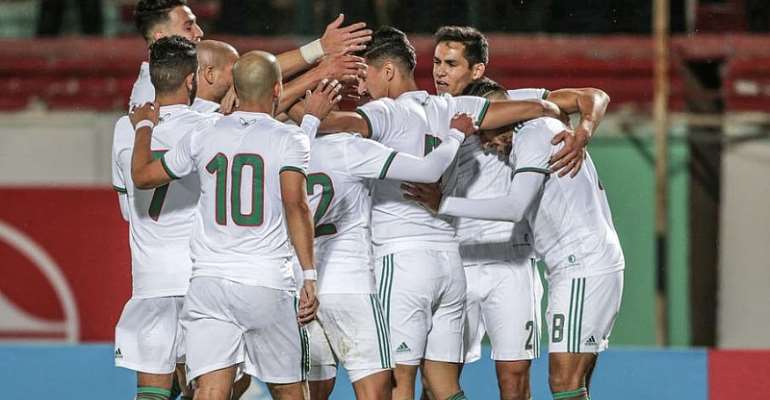 Riyad Mahrez-captained Algeria are expected to extend a 20-match unbeaten record when they host Zimbabwe this week as 2021 Africa Cup of Nations qualifying restarts after an 11-month coronavirus-induced break.

The Desert Foxes have won 15 and drawn five competitive and friendly internationals since they last lost away to Benin two years ago in the previous Cup of Nations qualifying competition.

Manchester City winger Mahrez says much of the credit for the unbeaten streak must go to coach Djamel Belmadi, calling him "a magician who has breathed a soul into our national team".

Algeria have hammered former champions Zambia and edged Botswana in group H, giving them a two-point lead over Zimbabwe, and it would be a shock if they did not collect three more points in Algiers.

It will be the first competitive test for Zimbabwe coach Zdravko Logarusic, a Croat whose contract with Sudan was not renewed after he guided them in the first two qualifying rounds.

Here, Supersport.com spotlights five of the other matchday three fixtures that start on Wednesday and continue through Saturday.

Mohamed Salah-inspired Egypt have made a woeful start to group G, scoring only once in draws with modest Kenya and even lower-ranked Comoros to lie third.

The record seven-time African champions will hope for goals from the Liverpool sharpshooter, whose successful penalty earned Liverpool a draw at Manchester City on Sunday.

Togo have fared even worse than Egypt under veteran French coach Claude le Roy, losing at home to the Comoros before salvaging a little pride by forcing a draw in Kenya.

Forced to pre-qualify, the Gambia needed a penalty shootout to eliminate football featherweights Djibouti, which makes their leadership of group D all the more remarkable.

The Scorpions have never appeared at a Cup of Nations, but an away win over Angola and a home draw with the Democratic Republic of Congo under Belgian coach Tom Saintfiet has Gambians excited.

Playing Pierre-Emerick Aubameyang-skippered Gabon away should prove the toughest test yet and Gambia will miss playmaker Hamza Barry, who is recovering from cruciate ligament surgery.

French coach Patrice Beaumelle has packed his Ivory Coast squad with Premier League players as he tries to get the Ivory Coast back on the winning trail after a shock away loss to Ethiopia late last year.

Madagascar defied the odds by reaching the 2019 Cup of Nations last-eight, and top group K after a 6-2 thrashing of Niger, but it is hard to imagine any result in Abidjan other than an Ivorian victory.

It is mind-boggling to glance at the group G standings with the Comoros, an island nation off the south-east coast of Africa, in first place and star-stacked Egypt only third.

The team are known as Les Coelacantes after a rare fish and have never come close to qualifying for the finals since debuting 13 years ago and suffering home and away drubbings from Madagascar.

Formidable at home for some time, they are no longer a pushover outside Moroni and a shock win in Togo via a Faiz Selemani goal helped create the two-point lead they hold over Kenya.

While Zambia have slipped since stunning Didier Drogba-inspired Ivory Coast in the 2012 Cup of Nations final, no one in the country expected them to be bottom and pointless in group H after two rounds.

Losing away to Algeria was anticipated, but losing at home to Zimbabwe was not, and Serb Milutin 'Micho' Sredojevic has been hired to urgently sort out the problems hampering the Chipolopolo (Copper Bullets).

"Playing Botswana will not be a walk in the park," he warned. "They are a very good side that have not conceded more than one goal in any of five matches under (Algerian coach) Adel Amrouche."