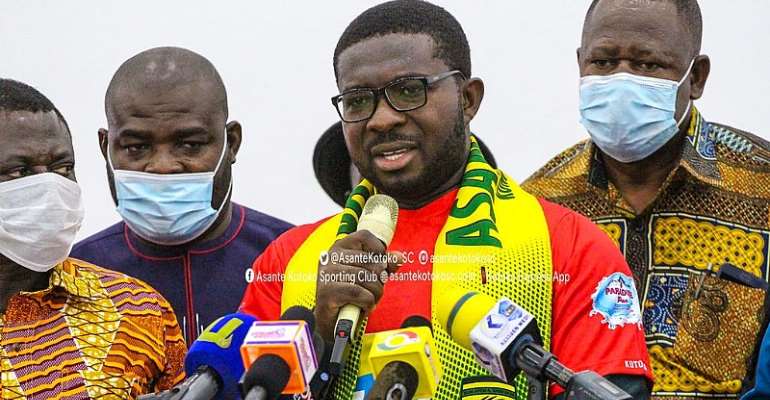 Chief Executive Officer of Asante Nana Yaw Amponsah is in hot waters for being accused of pocketing $15,000 which is meant for the agency that brokered Nathaniel Asamoah's transfer from Medeama SC and RAJA Casablanca of Morocco.

Asamoah, who is a former Kotoko striker joined Raja Casablanca in 2015 for a fee reported to be around $150,000.

However, media reports suggest that the deal was brokered by Kotoko CEO Nana Yaw Amponsah and an agency headed by Percy Allotey.

However, Percy Allotey in an interview with has said his agency is yet to receive their portion of the agency fee and has therefore cautioned the Asante Kotoko CEO to pay their $15,000 of the $150,000 contract sum or face court action.

“Our agency teamed up with Nana Yaw Amponsah in the transfer of Nathaniel Ohene Asamoah from Medeama sc to Raja Casablanca in the year 2015 and per the agreement, we have a difference of $15,000 to be paid to us by Medeama SC. After consulting Medeama SC we learnt they have given the money to Nana Yaw Amponsah,” he told Kumasi based Hot FM.

Meanwhile, Nathaniel Asamoah who currently plays for Aduana Stars has also dragged his former club Medeama to the Player Status Committee in relation to the Tarkwa based side failure to comply with the terms and conditions regarding his transfer to Raja Casablanca.

The GFA Player Status Committee has ordered Medeama to pay the amount they agreed on with Nathaniel Asamoah regarding his transfer to the Moroccan giants or suffer points deduction.

Encroachers on KNUST lands will face my wrath — Otumfuo war...
31 minutes ago