Jose Mourinho The Best Manager I Have Worked Under, Says Michael Essien 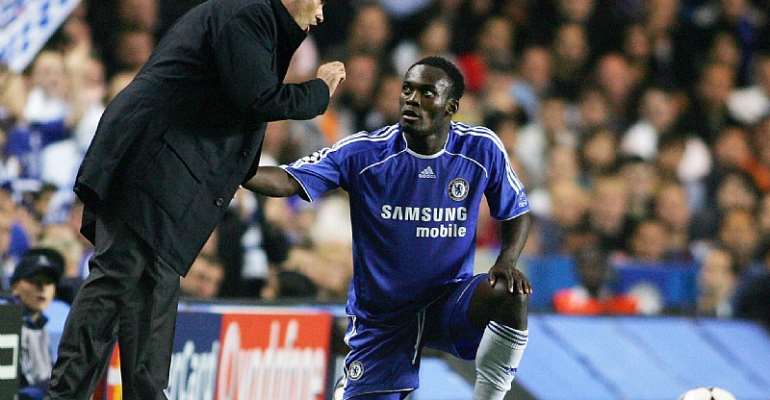 Ghana legend, Michael Essien has reiterated that Tottenham Hotspurs gaffer is the best manager he has ever worked with.

Essien, 36, joined Chelsea under the auspices of Jose Mourinho in a deal worth 24.5 million pounds from Olympique Lyon in 2004 in a club-record fee.

The dynamic midfielder established himself as a key player for Chelsea under Mourinho between 2004 and 2007 and then reunited with the Portuguese tactician whom he once called his daddy at Real Madrid.

Essien, despite having worked with a host of top coaches during a glittering career in the game finished by talking in glowing terms about former boss Jose Mourinho.

“He [Mourinho] would be the first one for me [in terms of managers I have worked under],” Essien told talkSports.

“They’ve all played a part in my career and development. It’s great to look back and reflect on what aspects they taught me and I will take that on board [in my coaching career].”

Meanwhile, Michael Essien has opened up on his coaching adventure, saying it is difficult to coach than to play football.

The former Ghana international joined the first team coaching staff of Danish side Nordsjælland in 2020 after his deal with Sabail in Azerbaijan came to an end.

The two-time Premier League winner is excited with the new career as he looks forward to being in the dug-out.

“I’ve just started to do my coaching badges and I got a great opportunity to come here. I’m very happy to be here and it’s all about a new transition in my career because I have a lot to give to the young ones.

“I’m enjoying my new role now. It’s very different to be a coach than to be a player. I’ve always been a player, so learning the coaching aspect of the game is very good and it gives me an open mind in terms of the game. I’m learning and enjoying it as well.

“My options are open. The most important thing is to learn the aspects of the game, get the badges and keep my options open and see what happens.”

Michael Essien as a player had an illustrious career playing for Lyon and Chelsea where he won the French Ligue 1 and the Premier League. The midfield dynamo at Chelsea also won the UEFA Champions.

Aside from Chelsea, he had loan spells at Real Madrid and AC Milan.

He also featured prominently for the Black Stars and represented the West African nation in two FIFA World Cups- 2006 and 2014.

Do DNA test for Rawlings alleged daughter before you bury hi...
46 minutes ago