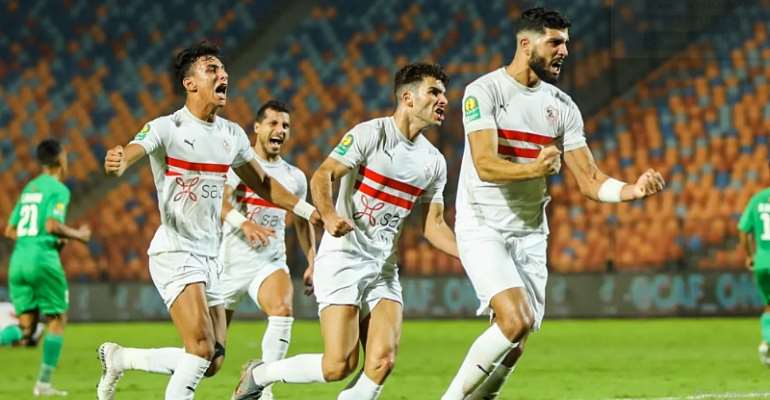 Zamalek left it late before beating Raja Club Athletic 3-1 on the night and 4-1 on aggregate at the Cairo International Stadium to storm into the Total CAF Champions League final.

The Egyptian giants booked a Cairo Derby date against rivals Al Ahly in the finale set for the Borg el Arab Stadium in Alexandria on November 27, making their first final since 2016 when they lost to Mamelodi Sundowns and now in search for a sixth Champions League crown.

Ben Malango had given Raja the lead two minutes after the break before Ferjani Sassi drew Zamalek level in the 61st minute. Mostafa Mohamed scored a quick brace in the 84th and 87th minutes to firm up the victory for the home side.

The White Knights despite starting slow extended their imperious form at home, going for the 14th match without losing and the third victory over Raja in four meetings.

In the opening half, Raja was the better side as they knew they had the tie in sight with a single goal deficit from the first leg.

From the onset, they were in attack mode and bossed possession, with the lion’s share of goal scoring chances.

They knocked on the Zamalek door in the eighth minute when a quickly worked move released Soufiane Rahimi on the right but his shot was always rising. Four minutes later, Malango had a go at goal with a snap shot from inside the box, but it came off Mahmoud Alaa for a corner.

The Moroccans kept fighting, but they couldn’t get the right quality of passing in the final third where it mattered most.

They almost got into the lead after 25 minutes, but Zamalek keeper Mohamed Abou Gabal made a good reflex save, reacting well to parry away the ball after Mohsine Moutaouali’s intended cross from the right took a wicked deflection off Mahmoud Hamdy’s back.

The skipper had another go at goal at the stroke of halftime, but his low effort from the edge of the box rolled wide.

Raja needed just two minutes after the breather to get their much needed goal. Malango struck a belter of a shot from the edge of the box that took a deflection off Abdalla Gomaah, taking the ball off keeper Abou Gabal’s path.

With the goal, the tie was evened on aggregate and Raja began scenting blood. They continued giving the tie a push, but Zamalek seemed to have awoken from their slumber.

Quarter of an hour later, the game was tied on the evening when Sassi drew Zamalek level with a brilliant shot from the edge of the box with the outside of his foot after being teed up by Achraf Bencharki, who scored the lone goal in the first leg.

The hosts began to play better, pass better and were more incisive going into attack.

Raja though didn’t take that lying down as they equally put in a shift, knowing just one goal would take them into the final.

Nonetheless, it was the home side who would get the champagne popping when Mohamed scored a quick brace in three minutes. He made it 2-1 in the 84th minute with a thumping header off an Ahmed Mostafa cross.

Three minutes later, he scored his second and Zamalek’s third of the night with a powerful low shot after beating the offside trap to race onto a long ball before beating the keeper one on one.

Bencharki thought he had put the icing on the cake with a sublime chip over the keeper after being put through by Sassi, but the goal was ruled out for offside.