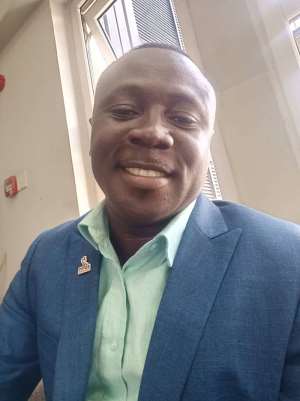 The sports Director at the Ghana Revenue Authority, Ebenezer Frimpong, has tipped it's hockey team to reach greater heights in the upcoming Greater Accra Hockey league.

The GRA team has over the past few years dominated the domestic league organized by the Greater Accra Hockey Association (GAHA).

In an exclusive interview with the Sports Director, he disclosed that his side performed better last season than any other team.

"The team did not perform poorly especially with the ladies, they were second on the African continent and eventually won every domestic cup. The men did not do so well in the ACCC, they placed 5th and it was due to the fact that they lost a lot of players to the Army and the team was virtually moving on a transition," he said.

He added that the technical team will beef up the squad with more players before the next season begins.

"We have a strong team that does the recruitment of players that includes me, the coaches, and technical staff and sometimes captains as well. We are looking at strengthing some areas that the team needs.

"We have talked to about two or three players and we are most likely to bring on board four players towards next season, " he revealed.

He lamented on the lack of resting period for his side which affected their performance.

"The fixtures of the league is a little tricky because sometimes you have to pause for Kumasi or Cape Coast then the club championship also coming in, so we are caught between the fixtures and it is not helping, not only us but all the clubs," he stated.

" But I think it's about time Ghana Hockey as a whole have to think about a bigger calendar where we can infuse certain training because the national team suffers as well as the clubs. The aspect of fatigue sets in and it is not helping," he added.

The sports director stated that he envisages the total success of his side next season.

"The management of the GRA is putting measures in place to ensure we remain the best. If you look at the technical staff, coaches, and the recruitment of players, it will tell you that we are working very hard.

"The team will start proper training schedules next year, " he hinted.

Hottest Photo Reports
Catch up with all the political quotes from our politicians.
Advertise here
More from Hockey
ModernGhana Links
Ghana loses 3-2 to Kenya in Hockey at 2022 CWG
Ghana suffers second half collapse to lose 1-6 to Wales in Men’s Hockey
Ghana misses out on big win against Canada in Commonwealth Games Men’s Hockey
TOP STORIES