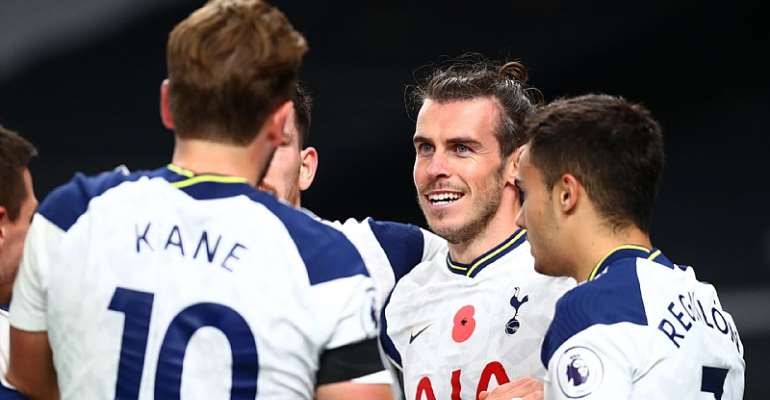 Gareth Bale was the hero for Tottenham Hotspur as his emphatic 73rd-minute header gave Jose Mourinho’s men a 2-1 win over Brighton & Hove Albion in the Premier League.

The Welshman had only been on the pitch a couple of minutes before scoring his first goal since re-joining Spurs on loan from Real Madrid in September, a first strike for the club in seven years and 166 days.

Harry Kane had given Spurs the lead from the penalty spot after just 13 minutes, but Tariq Lamptey cancelled that effort out when he fired past Hugo Lloris early in the second-half for his first senior goal.

Tottenham felt Pierre-Emile Højbjerg had been fouled in the build-up to the goal, but the referee Graham Scott elected not to rule the goal out despite reviewing the incident on a pitch-side monitor, much to the condescension of the Tottenham players.

It was not the first time Scott had to consult VAR during the game, with the referee initially awarding the home side a free-kick on the edge of the area for what was adjudged to be a foul by Lallana on Kane before controversially changing that decision to a penalty that the England striker duly scored.

Even from the replays it was not entirely clear whether it was Lallana or Kane who was at fault for the coming together, while it was also hard to make out whether the incident took place outside of the area or not.

Overall, It was an underwhelming performance from an evidently fatigued Spurs team playing their third match this week but Brighton were unable to supplement their energy and fight with a cutting edge in attack, struggling to test Lloris throughout the game.

That could be in part down to Graham Potter’s controversial decision to drop their main striker Neal Maupay from the matchday squad despite his four goals in six games so far this Premier League season and deploy winger Leandro Trossard in a less familiar central attacking role instead.

Goalkeeper Mat Ryan was the other shock omission from the starting XI, with the Australian being demoted to the bench in favour of 22-year-old Spaniard Robert Sanchez, who spent last season on loan in League One with Rochdale.

Although it was a valiant performance from the Seagulls and both Sanchez and Trossard performed admirably, Potter will understandably come under increased pressure for making such a risky decision, with the introduction of debutant and former England international striker Danny Welbeck late on adding more of a presence up front.

The win sees the North London club leap to 2nd in the Premier League table on fourteen points - one spot behind Liverpool, while Brighton continue to hang above the relegation zone in 16th.