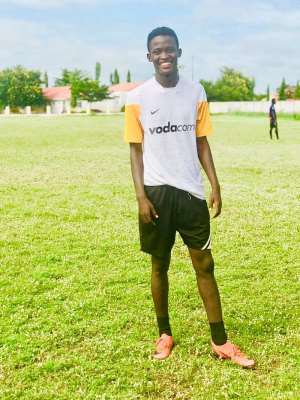 Super talented left-back Hassan Mohammed is on the verge of joining Ghana Premier League side Dreams FC with a deal set to be locked in the coming days.

Hassan, 18, is a left-footed talented footballer who thrives very well as a left and also has the ability to play as a holding midfielder or a left wing-back.

The future star who plays for Golden Boys FC, a Division Two side in Accra has been training with the Ghana Premier League giants and could officially join soon.

Hassan was handed an invitation to the Ghana U17 side for the 2018 U17 AFCON by then-coach Karim Zito but picked an injury that derailed his dream of featuring at the tournament.

Sources close to this portal have revealed that there are several clubs both locally and abroad that are keen on securing the signature of the talented young boy whose technique in taking set-pieces has been applauded by all.