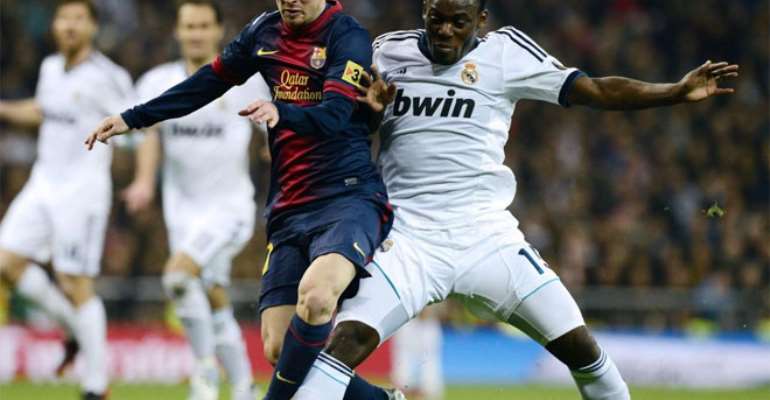 The competitiveness of these two teams – who to this day are two of the three LaLiga Santander sides, along with Athletic Club, to have never been relegated from the top flight – makes ElClasico matches thrilling for spectators and players alike. After this past Saturday’s game, Real Madrid narrowly lead the all-time head to head in LaLiga with 74 wins ahead of Barcelona’s 72.

Africa has also contributed to this legendary football contest. Let’s take a look at some of the most well-known African players who have featured in El Clasico.

Although he is now retired, the iconic Cameroonian footballer was contracted to play for FC Barcelona from 2004 to 2009. During Samuel Eto'o’s memorable football career, he scored over 56 goals for the national team, 100 goals for FC Barcelona and over 250 in total, famously netting in his first ElClasico appearance: a 3-0 win at the Camp Nou in 2004.

Star midfielder and Ivory Coast national, Yaya Touré, played for FC Barcelona from 2007 until 2010. He made 74 appearances during this time, helping the club win an unprecedented six major trophies in 2009. The 100 caps that he’s earned for his national side reflect his talent and explain why he’s seen as one of the greatest midfielders in modern football history.

He wore the number 24 jersey while playing for FC Barcelona, including in Barça’s unforgettable 6-2 win at the Bernabeu in 2009.

Malian star Mahamadou Diarra played for Real Madrid from 2006 until 2011. Though his spell at the club was blighted by injury, Diarra was a regular fixture in midfield for Los Blancos under a number of different managers and made 128 appearances for the club in all competitions, scoring four goals. He made four ElClasico appearances, ending with three wins, one draw and no defeats.

He wore the number 6 jersey while playing for Real Madrid as well as AS Monaco and Vitesse Arnhem.

Michael Essien was the first Ghanaian footballer to play in El Clasico. He played for Real Madrid while on loan from Chelsea during the 2012/2013 season, making 21 appearances and scoring two goals. His second goal was scored during his last match for Real Madrid and was dedicated to his mentor and former Real Madrid coach, José Mourinho. The Accra native played in both LaLiga ElClasicos that season, winning one and drawing the other.

His favourite number throughout his career was five, but he wore the number 15 jersey for Real Madrid during his time in LaLiga.