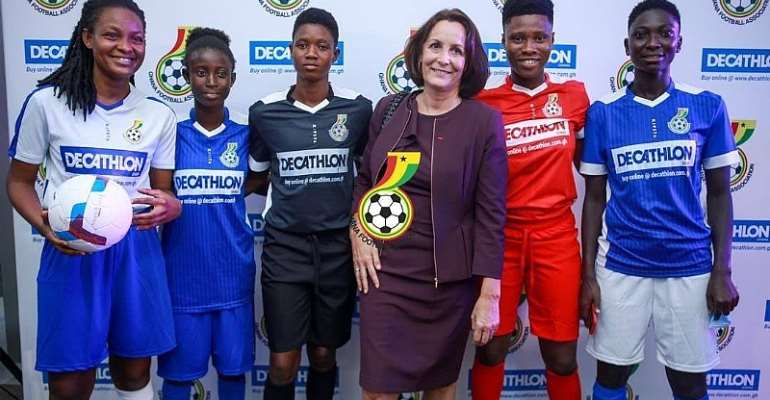 Ghana Football Association's 4-year deal with Decathlon makes Kipsta the official for the Ghana Women's Premier League and the Regional Women's Leagues as well as the FA Cup.

Rosalind Amoh, vice-chairperson of the Women’s Premier League Board said football fans should not be confused about the balls.

The SWAG executive member wishes to lay emphasis that Kipsta is for the ladies, and the Women’s Sports Commission is most grateful to Decathlon for supporting women and girls in football.

Decathlon Ghana Limited was unveiled as the sports retail partner of the Ghana Football Association (GFA), for a period of four years.

Per the agreement, Decathlon Ghana Limited will be the official GFA retail partner for the sale of all Black Stars Paraphernalia and other merchandising products.

According to the partnership agreement, Decathlon Ghana will provide One Thousand (1000) Kipsta Balls valued at One Hundred and Fifty Thousand Ghana Cedis (GHc150,000.00) per year for four years.

The GFA will also receive other complementary Sports products valued GHc100,000.00 per year for the four year period totalling GHc400,000.00.Speaking at the launch of the partnership deal, President Kurt Edwin Simeon-Okraku announced that the balls and sports products will be allocated to the Women’s Premier League (WPL).

“This partnership will ensure that the Women’s games are well equipped to enable them to excel in their discipline. Therefore, over the 4-year contract period, Decathlon Ghana will support the development of Women’s football in Ghana to the tune of GHc600,000.00”.

“The GFA will also have the honour of receiving other complementary Sports products valued at GHc100,000.00 per year, totalling GHc400,000.00 for the four (4) year period under this agreement all to be used by Clubs in the Women Premier League (WPL)," President Simeon-Okraku disclosed.

Country Manager of Decathlon Ghana, Kwasi Taburi said it is an honour to support the development of Ghana Football and reiterated the Sports Wear Company’s commitment to the agreement.

The launch attracted the French Ambassador to Ghana, H.E Anne Sophie AVÉ who expressed delight at the partnership between the GFA and the French sportswear giants which operate the biggest sports shop in West Africa.

The GHc1,000,000 deal was announced at a ceremony on Thursday, October 22, at the Decathlon shop at the Junction mall in Accra.

Your insatiable taste to travel in another luxurious jet to ...
48 minutes ago

Ghana’s 3.9% economic recovery is sluggish; Ghanaians must w...
50 minutes ago