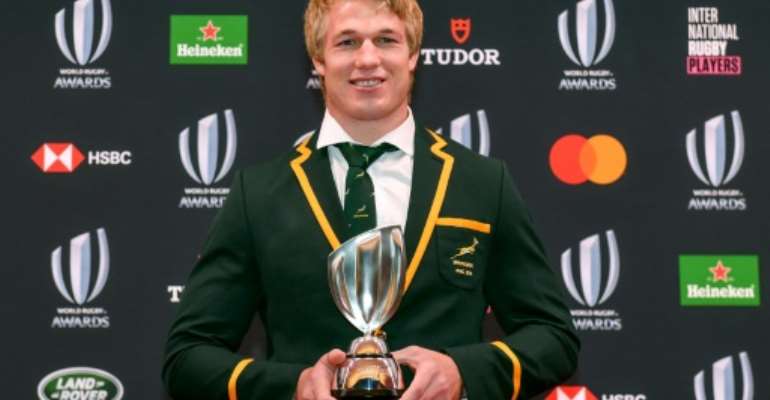 Springbok Pieter-Steph du Toit poses with the 2019 World Rugby Player of the Year trophy at the awards ceremony in Tokyo last November.. By Kazuhiro NOGI (AFP)

The 28-year-old Springbok flanker limped off injured in a match against the Auckland Blues in Cape Town and swift medical attention saved his leg from being amputated.

Du Toit had further surgery this month and Dobson admitted that the chances of him playing during the two-competition domestic season that ends on January 23 are slim.

"At this stage it does not seem like he will play this year," Dobson told a media briefing after a Stormers training session in Cape Town.

"With the (Currie Cup) final on January 23, we would do well to get him back on the field in that competition.

"I am not expecting him to play in this (Super Rugby Unlocked) competition. If we get him for the last two or three games (of the Currie Cup), it would be great.

"The good news is that the muscle in his leg that affects the nerve is regenerating. That was the big concern and where his career may have been in jeopardy."

Super Rugby Unlocked finishes on November 21 and the Currie Cup, the oldest domestic rugby competition in the world, runs from November 27 to January 23.

Better news for the Stormers was that the feared long-term absence of Springbok World Cup-winning captain Siya Kolisi due to a hamstring injury has not materialised.

The loose forward was injured in a dramatic comeback victory at the Pumas this past weekend, but Dobson said it was "not as bad as we thought and he will be out for between two and three weeks".

Springbok forwards Steven Kitshoff and Scarra Ntubeni, who were quarantining last weekend after coming into contact with a person who tested positive for Covid-19, will resume training in midweek.

Dobson expects the duo to be available for an away match against Super Rugby Unlocked leaders the Bulls in Pretoria this Saturday with Kitshoff the probable replacement for Kolisi as captain.