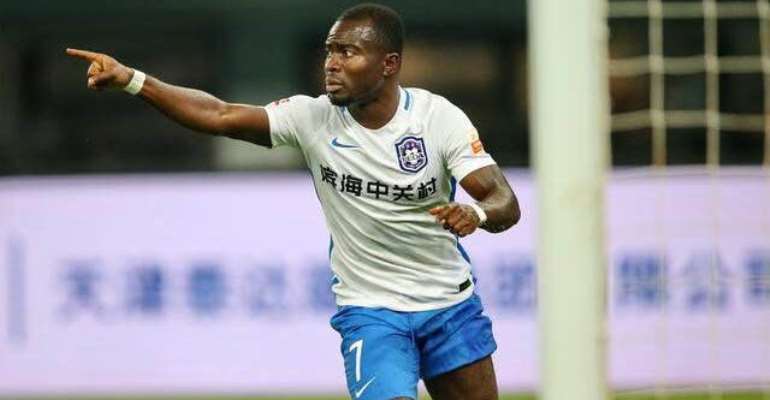 Ghana forward, Frank Acheampong netted a sensational brace on Monday morning to power his Tianjin TEFA outfit to a 2-0 win over Dalian Pro in the Chinese Super Lig.

The attacker has been integral for his team all season and scored twice in the team’s double-header encounter against Shenzhen Kaisa last week to ensure the team avoids relegation.

In another relegation playoff match against Dalian Pro today, Frank Acheampong was in the thick of affairs for Tianjin TEDA to help the side look for a win.

Following an impressive outing at the Dalian Sports Center Stadium, the Black Stars asset dazzled and scored a brace to inspire his outfit to a crucial away win against the opponent.

First, Frank Acheampong found the back of the net in the 12th minute before scoring again in the final minutes of the first half after he was assisted by Kaimu Zheng.

Having lasted the entire duration of today’s match, the Ghana international merited a high rating of 8.4 from Modernghana Sports partners SofaScore, as he run away with the Man of the Match award.

This season, Frank Acheampong has featured in 15 matches for Tianjin TEDA and now has 4 goals and 1 assist to his name.

Akufo-Addo is confused over MMDCEs appointment – Ho Central ...
26 minutes ago