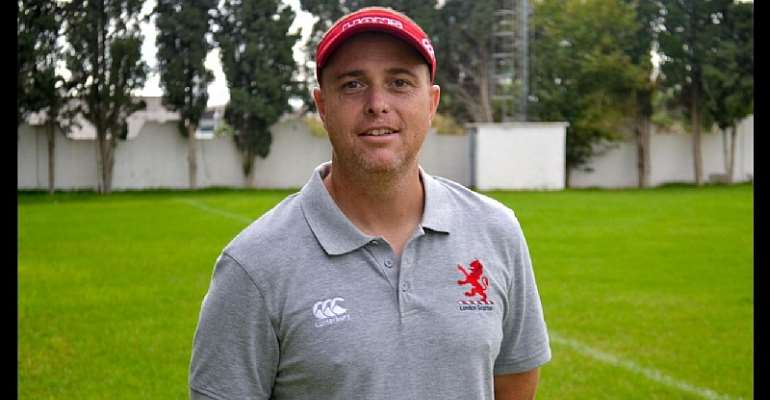 Players need to be equipped with these abilities which the professional Rugby Union place a heavy emphasis on these to be in shape to meet the demands of the top-level competitions.

These have to be taught by a top-level Strength and Conditioning coach who have in-depth knowledge about the game.

Ghana was lacking these though competing very well at competitions.

It was evident when Ghana defeated Mauritius in the finals of the 2018 Rugby Africa Bronze Cup held at the Nduom Sports Complex at Elmina, Ghana.

Though Ghana defeated Mauritius 23:17, the conditioning of the players on the day was not convincing according to the President and Board Chairman of the Ghana Rugby Football Union, Mr. Herbert Mensah.

“It was evident that the Ghana Eagles not only lack basic skills and techniques but that the conditioning of the players was far from ideal. You can be big and fit but that does not necessarily mean that you have the conditioning to compete at a much higher level”, Mr. Mensah said.

This led to the official appointment of coach of Scottish FC Stuart Aimer as the Strength and Conditioning coach of the Ghana Rugby team (Ghana Eagles).

That was a new dawn for the Ghana Rugby as a new history begun writing in the skies . The appointment of Stuart Aimer has brought greater impact to the federation.

Stuart Aimer was appointed in May, 2018 with the sole aim of developing the players to become faster and more powerful for the sport.

determination and willingness, I will prepare Ghana for the higher level of the sport that they are about to embark on”, Aimer said after his appointment some two years ago.

Stuart Aimer was not new to the federation as was offering advice to coaches for the better goal of the Ghana Rugby.

His role alongside that of the technical team made up of the legendary Collin Osborne (Technical Director), Coach Lovemore ‘Dallas’ Kuzorera, (Head Coach), Coach Jeffery (Technical Assistant), Mr. Hakim (Team Manager) has propelled Ghana Rugby to become the most successful sports federation in the country over the last four years; winning four trophies based upon which a reward of $100,000 from the President of Ghana, His Excellency Nana Addo Dankwah Akufo-Addo was awarded to the Union when the team paid a courtesy call on him some months ago.

Speaking about himself, Stuart Aimer who is well-known for his top-level strength and conditioning skills said,

“I am the occupier of the Tribe Performance based in Richmond, where I use this space to conduct training sessions one to one, groups and assist everyday athletes, weekend warriors, etc. to reach their best potential.”

“Born in South Africa and moved to the UK in my mid-twenties and now settled with my wife, Claudia, and three children.

“My first S&C role was a KCS old boys for a few years, interned at various clubs in the local area such as London Scottish Academy/Amateur which I lead the program for two years and helping boys transfer from the academy into the senior squad”

“Recently, being involved with the S&C preparation for Jamaica UK crocs that feed into the Jamaica 7’s boys.

The first tournament was Hong Kong 2018 and recently the 2019 Regional American North which we placed 2nd to qualify for the Olympic repechage for June 2021, more lately we competed in the first HSBC challenger series in Uruguay and Chile”

“The DOR of Ghana Rugby, Herbert Mensah invited me to support in their 2018 preparation for the African Sevens in Tunisia 2018.

This was the start of my experience in helping Ghana rugby players to achieve their passion for rugby and put Ghana rugby on the map.

The preparation for a match between Ghana vs Ivory Coast which we made huge strides to competing at the top level in 15’s rugby. The Squad showed how hard work, commitment, and love of the game can go a long way to achieving your dreams”

“My favourite sport is cricket believe it or not, and the highlight was being at the cricket world cup final and watching the super over in which England won the Cricket World Cup final”

“I am often found either at Tribe Performance, a coffee shop in Richmond or on a rugby pitch with the London Scottish boys, as I take them through their paces in preparation for the start of our first game. It’s an awesome group of boys that are competitive and driven to do well for London Scottish and look forward to working with the coaches and staff in achieving success when the season starts.”

Ghana Rugby is the official full member of both World Rugby (2017) and Rugby Africa in Ghana-West Africa and is responsible for the management and development of the Game Rugby Union in the country.

The Union is governed by a Constitution and administers five KPAs (Key Performance Areas) namely:

(1) Youth Development & Growth through the World Rugby “Get Into Rugby” Programme,