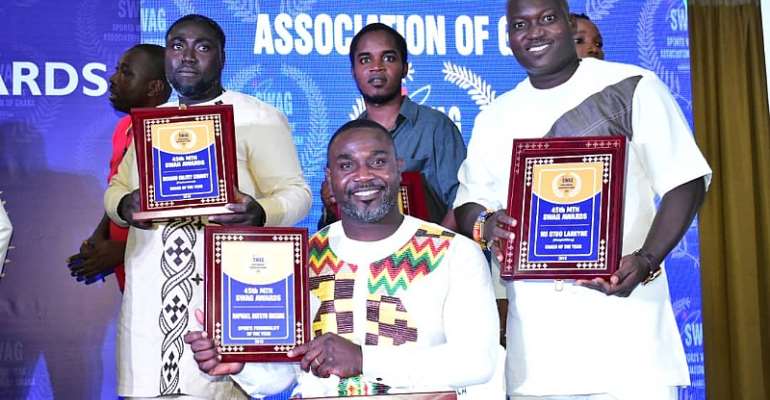 Mr Samson Deen, President of the Ghana National Paralympic Committee (NPC) has commended the Sports Writers Association of Ghana (SWAG) for voting Raphael Botsyo Nkegbe as the Sports Personality of the Year 2019.

He said it is a great that a disabled athlete has won the prestigious award after beating footballer of the year, Jordan Ayew and former IBF Lightweight boxing champion, Richard Commey who also won the boxer of the year award.

Mr Deen expressed that the Sports Writers Association of Ghana (SWAG) Awards is the most credible award in Ghana having been running for the past 45 years.

He noted that such gestures motivate the athletes and inspire them to train harder to do more in their respective disciplines.

He hinted that the para powerlifting team have been doing well locally and internationally and should also be commended for their efforts.

The last time a disabled athlete won the top award was in 2011 by Kumasi based Ajara Mohammed. She also beat stars like Andre Ayew and Asamoah Gyan.

He said adding his name to the membership of the Local Organising Committee (LOC) for the 2023 African Games has been welcomed by the African and International Paralympic Committees as they want a uniformed and successful African Para Games, having learnt much from the last edition in Morocco.

He appealed to corporate Ghana to support the LOC and its sub-committees to make the 13th African Games successful because it is a great test for the nation.

“The para-athletes have promised to make a medals haul for Ghana, so they are intensifying their training” he stressed.

According to Mr Deen who is an experienced Travel and Tours Agent and Consultant, the African Games is an opportunity to market Ghana and Ghanaian businesses.

He said the sports media must be positive in their reportage on the 2023 Games in order to attract sponsorship and massive support from all Ghanaians.

The African Games has been scheduled for September 2023 in three cities.

Meanwhile, a new Olympic Stadium is to be built at Borteyman in the Greater Accra Region for the Games.

Over 7,000 participants and 3,000 officials from over 50 nations are expected at the first ‘Green Games’ which would see champions in over 20 disciplines.

The Para Games is being planned to go along with the abled body Games.

The Games will also serve as qualifiers for the 2024 Paralympic and Olympic Games in Paris.