A Lewis in wonderland after claiming record 92nd Formula 1 victory 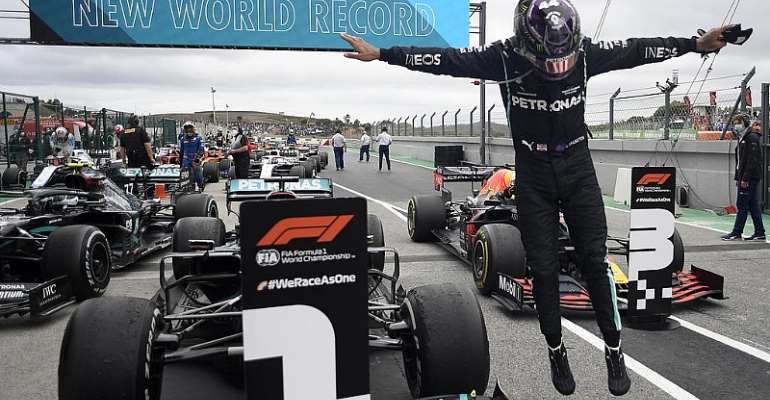 Lewis Hamilton declared himself in dreamland on Sunday after winning the Portuguese Grand Prix to notch up a record 92nd triumph at a Formula 1 race.

Hamilton, who is seeking a record-equalling seventh drivers' title, finished the 66 laps of the Autódromo Internacional do Algarve in one hour, 29 minutes and 56 seconds.

He was 25 seconds ahead of his Mercedes stablemate Valtteri Bottas. Red Bull's Max Verstappen was third.

With five races remaining of a season reconfigured due to the coronavirus pandemic, Hamilton leads Bottas by 77 points and Mercedes are 209 points ahead of Red Bull in the constructors' race.

"I only ever dreamed of being where I am today," said Hamilton after embracing his father Anthony, who managed his early career.

"I didn't have a magic ball when I chose to come to Mercedes. All we have ever tried to do is make the most of it every single day. We are all rowing in the same direction."

Consistency
Hamilton claimed his first victory at the Canadian Grand Prix during his debut season in 2007. His 92nd came in his 262nd race 14 years later.

At the age of 35, the Briton holds the record number of wins and the accolade of the only driver to have won a race in every F1 season in which he has competed.

Gratitude
Hamilton, who moved to Mercedes in 2013 after starting his career at McLaren, paid tribute to the Mercedes team. "I really owe it all to these guys for their teamwork, continually innovating and pushing the barrier ever higher every year.

"Thanks to everyone for continually pushing, no one is sitting back, everyone is pushing. It's the most incredible thing to be surrounded by these guys, it really inspires you - the collaboration - there is nothing like it."

Mercedes team chief Toto Wolff, who has helped guide Hamilton to five of his world titles and the team to an unprecedented six in a row, said: "Who would've thought when we started this project in 2013? It's almost a surreal number of wins.

"From Lewis, it's his absolute passion and energy and its everything he puts into the sport - and the talent and the ability. He's just standing out."