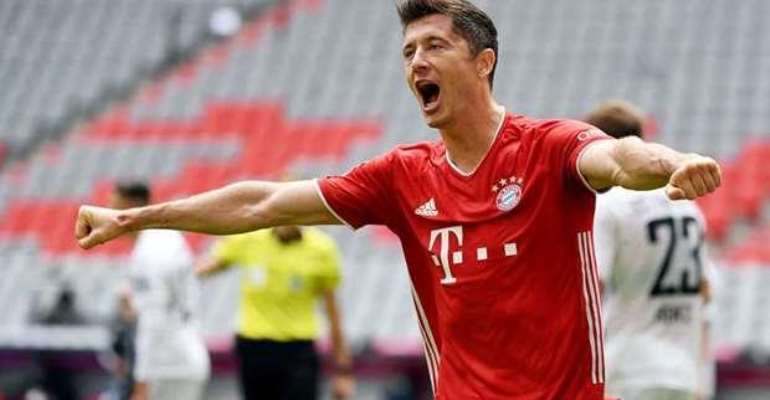 Bayern Munich striker Robert Lewandowski made more history with a hat-trick in a comfortable win over Eintracht Frankfurt.

The Pole is the first player to have scored 10 Bundesliga goals in the opening five rounds of games.

But left-back Alphonso Davies could be out for up to eight weeks after tearing ankle ligaments in the second minute.

Lewandowski opened the scoring after 10 minutes before heading a second and then netting from Douglas Costa's pass.

Leroy Sane and Jamal Musiala were also on target as Bayern became the first team to score 22 goals after five Bundesliga games.

England Under-17 international Musiala, 17, is only the seventh player to score more than one Bundesliga goal before his 18th birthday.

Bayern move onto 12 points from five games, one behind leaders RB Leipzig, who beat Hertha Berlin 2-1.

The 32-year-old has carried his fine goalscoring form from 2019-20 into this season.

Last term he netted 55 goals in 47 games in all competitions, including 34 in 31 in the Bundesliga.

This season, he is averaging one goal every 37 minutes in the league.

His 10 goals have come in four league starts, failing to score as a second-half substitute in their 4-1 defeat by Hoffenheim last month or in three games in other competitions.

On Davies' injury, boss Hansi Flick said: "He has injured ligaments - one is torn, one is partially torn. We expect him to be out for six to eight weeks.

"If a player of this quality drops out, it hurts."
It means the Canada international may not play again in 2020, with the Bundesliga's final games before its winter break exactly eight weeks from now.

Elsewhere, Borussia Dortmund beat local rivals Schalke, who have not won a league game since January, 3-0 thanks to goals from Manuel Akanji, Erling Braut Haaland and Mats Hummels.

2020 WASSCE Performance Puts Akufo-Addo Ahead Of Mahama – Ad...
26 minutes ago