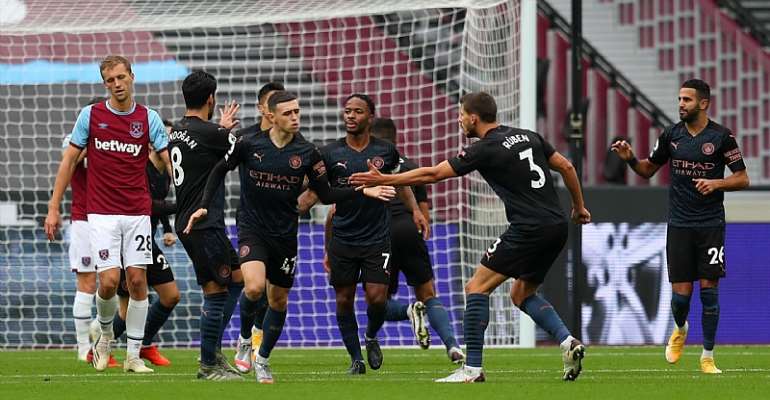 Phil Foden came off the bench to rescue a point for Manchester City in a 1-1 draw with West Ham at London Stadium on Saturday.

The hosts took the lead against the run of play in the 18th minute with Michail Antonio hooking a brilliant finish over his head to stun City. Since Premier League football restarted in June, only Harry Kane (12) has scored more Premier League goals than Antonio (11).

City needed some inspiration and turned to young Foden from the bench at half time, and the England international made an instant impact as he levelled with his third of the season in the 51st minute.

With West Ham losing Antonio to injury, City looked set to make it three wins in a week, but the Hammers held firm and saw out the draw that keeps them above City in the table.

The headline news ahead of kick-off was that Pep Guardiola named an unchanged City side in consecutive games for the first time since October 2017 against Stoke and Napoli.

As we got underway, West Ham were happy to sit back before hitting the visitors on the counter, and that tactic worked a treat as, out of nowhere, Vladimir Coufal clipped a cross into the middle, and Antonio did the rest to score his 11th goal in his last 12 Premier League games in style. There was a hint of handball in the build-up from Tomas Soucek, which may have been penalised last season, but the goal was allowed to stand.

City dominated possession but did little with the ball in the first half. That all changed, however, when Foden came on, with Joao Cancelo setting Foden up for the equaliser. The finish was a fine one, on the turn.

The chances came and went for City to win it late on, with Raheem Sterling missing the best of them, as Guardiola's side remain in the bottom half, having won just two of five league games.