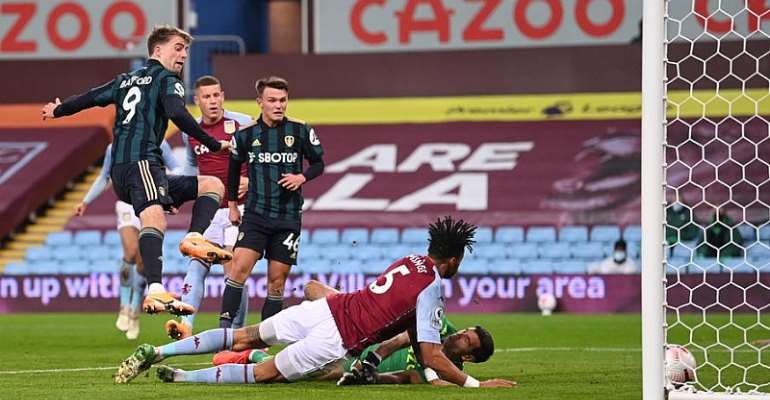 Leeds United's Patrick Bamford scored a superb hat-trick as they brought Aston Villa's winning start to the season to an abrupt end with a 3-0 away victory in the Premier League on Friday.

After an entertaining but goalless first half, Jack Grealish went close to a stunning opener for Villa in the 52nd minute, running from the halfway line and jinking into the box before his shot was well saved by keeper Illan Meslier.

Three minutes later though Villa found themselves behind when a Rodrigo shot was pushed out by Emiliano Martinez and Bamford pounced to slot home the loose ball.

Bamford then made it 2-0 with a fine shot from the edge of the area in the 67th minute after a strong burst from midfield by Mateusz Klich had put Villa's defence on the back foot.

The Leeds striker then completed his hat-trick, his smart footwork creating just enough space for a precise, curling finish after 74 minutes for his first Premier League treble.

The win moves Leeds up to third on 10 points, albeit having played an extra game, two points behind Villa, while leaders Everton, who have 13 points, are at Southampton on Sunday.

Akufo-Addo is confused over MMDCEs appointment – Ho Central ...
9 minutes ago

I denounce any disturbance in Odododiodio in my name – Mayor...
44 minutes ago