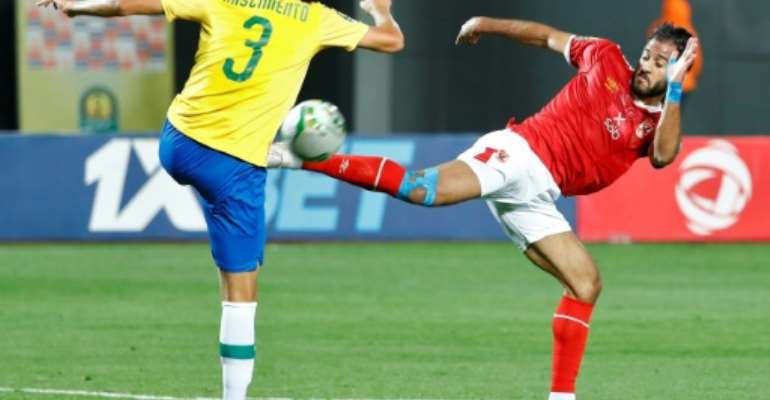 An early Marwan Mohsen goal set Al Ahly of Egypt on their ay to a 3-1 home victory over Wydad Casablanca of Morocco on Friday and a place in the CAF Champions League final.

Mohsen struck after five minutes. Hussein el Shahat added a second midway through the first half as Ahly doubled their aggregate advantage having won the first leg of the semi-final 2-0 last weekend.

Ahly qualified 5-1 overall and must wait until November 1 before knowing whether they will face fellow Egyptians Zamalek or Raja Casablanca of Morocco in the single-match final five days later.

Zamalek were due to defend a 1-0 first leg lead over Raja on Saturday in Cairo, but the match was postponed when eight of the Moroccan squad tested positive for coronavirus.

Mosimane had warned his team that they could face a "difficult" return match against Wydad, reasoning that Wydad were capable of achieving in Cairo what Ahly did in Casablanca.

Ahly needed the intervention of VAR (Video Assistant Referee) to go ahead as Mohsen was flagged offside after a chipped pass released the forward to score with a shot into the bottom corner.

The South African referee opted for a review and the goal was allowed amid furious protests from Wydad, who now needed to score at least three times to survive.

There was no controversy about the second Ahly goal as El Shahat latched on to a diagonal pass from Malian Aliou Dieng and beat Yahia Attiyat Allah twice before scoring from inside the box.

After goals from forward Mohsen and midfielder El Shahat it was the turn of defender Yasser Ibrahim to net for Ahly.

He headed a corner into the net past goalkeeper Ahmed Reda Tagnaouti just before the hour mark to put Ahly five goals in front on aggregate.

Wydad were shattered as they experienced a rare hiding in Africa, but they did have the final say as El Moutaraji cut in from the wing and fired past rarely-tested Ahly goalkeeper Mohamed el Shenawy.

This was the 10th match between two of the strongest sides in Africa with Ahly winning four, Wydad two and four drawn.

Should Zamalek qualify next weekend, it will be the first CAF Champions League final between clubs from the same country.

Akufo-Addo is confused over MMDCEs appointment – Ho Central ...
35 minutes ago