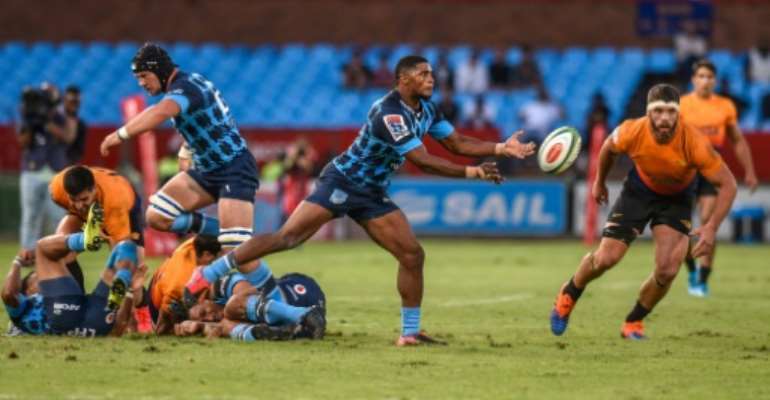 The star-less home team looked set to shock a visiting team including five World Cup winners when they led 37-14 in northeastern city Mbombela with 19 minutes remaining.

Loose forward Kolisi watched the dramatic comeback from the touchline having retired injured during the first half with a suspected hamstring tear.

Stormers began their campaign last weekend with a six-point win over the Lions and lie second on the standings, one point behind the Cheetahs, who play Saturday.

The bonus-point loss for the fourth-place Pumas, a South african team based in Mbombela, continued a fluctuating season in which they lost heavily to the Cheetahs and upset the Griquas in away matches before tackling the Stormers.

"Belief and a never-say-die spirit got us over the line," said Kolisi, who skippered South Africa to victory over England in the 2019 Rugby World Cup final in Japan last November.

"Staring at a heavy loss, the boys threw everything they had into the match and it paid off with four tries and four points.

"However, for the second weekend in a row, we took too long to get into our stride. We are away to the Bulls next Saturday and cannot afford to repeat that mistake."

Pumas captain and lock Pieter Jansen van Vuren cut a sad figure as he reflected on the late collapse after outscoring the Stormers by four tries to two.

"We are very disappointed to have let this match slip from our grasp. After a great first half, I believe we got a little carried away and began throwing the ball around.

"Losing Eddie (fly-half Fouche) to an injury during the first half was a big blow as he has been outstanding this season, although Niel (Marais) did not let us down as his replacement."

Fouche kicked 13 points as the fired-up Pumas built a 30-14 half-time lead behind closed doors due to the coronavirus pandemic.

That lead stretched to 23 points when winger Neil Maritz scored his second try of the match while the Pumas were a man short after back-row forward Jeandre Rudolph was sin-binned.

Then, Fouche and Mbonambi scored pushover tries, Zas crossed the line unopposed and Gelant evaded three Pumas as he cut inside to score the match-winning try.

On Saturday, the Lions host the Cheetahs in Johannesburg, the Bulls face the Sharks in Pretoria, and the winless Griquas have a bye.