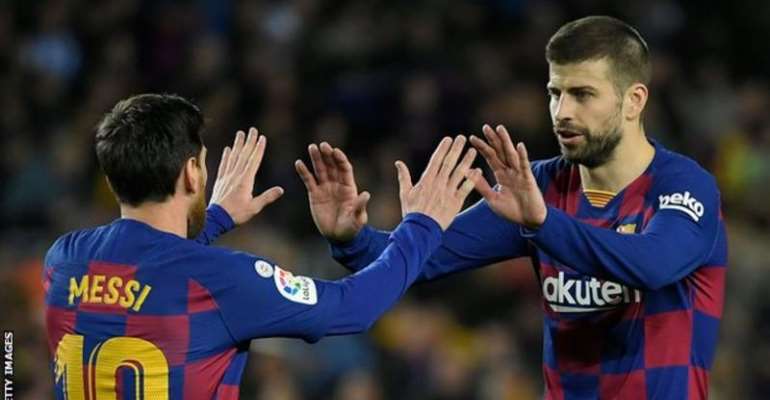 Messi and Pique have won many trophies together at Barca, including eight La Liga titles

Defender Gerard Pique has criticised Barcelona for their handling of Lionel Messi's contract situation, on the eve of El Clasico against Real Madrid.

Forward Messi requested a transfer this summer, believing he could leave for free according to a clause in his deal.

"We should preserve our figureheads, not underappreciate them," Pique told La Vanguardia newspaper.

"It's all too confrontational. What's going on? Messi deserves everything; the new stadium should be named after him first and then the sponsor.

"I ask myself: How can it be that the best-ever player to have played the game, who we have been lucky enough to enjoy, wakes up one day and sends a Burofax (recorded delivery mail) because he feels like he's not being listened to?"

The details of a clause in Messi's contract proved crucial to his situation this summer.

The Argentine, 33, says the fact he did not tell Barca he wanted to leave before 10 June meant that any prospective club would have to meet his 700m euro (£624m) release clause, instead of paying no fee.

Messi's decision to leave came after a disappointing season for Barcelona, which saw them finish second to Real Madrid in La Liga and humiliatingly crash out of the Champions League in the last eight courtesy of an 8-2 defeat by Bayern Munich.

They hired Ronald Koeman as manager and attempted to freshen up their squad in the summer but have had an inconsistent start to this campaign, with last weekend's shock 1-0 loss to Getafe leaving them ninth in La Liga.

Pique's comments come just a day before the first El Clasico of the campaign and two days after the 33-year-old centre-back signed a new three-year deal at the club. He was sent off near the end of this week's Champions League win over Ferencvaros.

A vote of no confidence against the board, led by president Josep Bartomeu, is also believed to be imminent.

Pique addressed media reports that Bartomeu knew that the club had hired a social media agency to criticise the players earlier this year - allegations which Bartomeu denies.

"I, as a Barca player, see that my club have spent money, money they're now asking us for (in salary reductions), to criticise us - and I'm not talking about criticising people outside the club, but current players - it's atrocious.

"I asked (Bartomeu) for an explanation and he said 'Gerard, I didn't know about it', and I believed him. But then you see that the person who was responsible for doing this is still working at the club.

"That hurts me a lot. And I'm saying that here because I've already said it to the president, too."