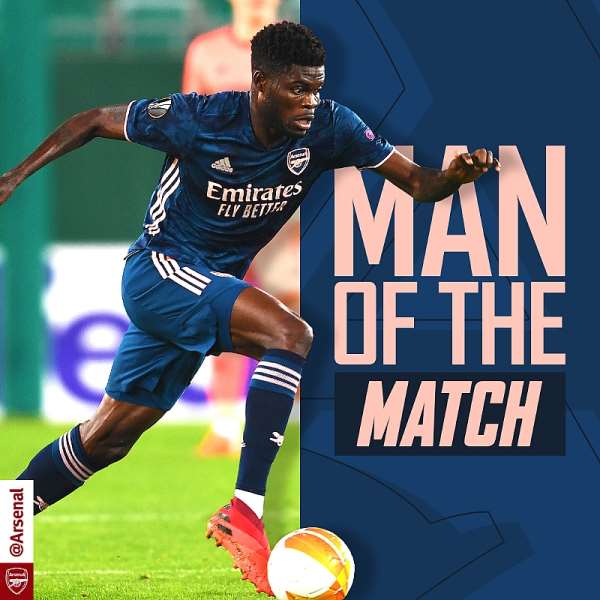 Ghana superstar, Thomas Partey has been named the Man-Of-The-Match in Arsenal 2:1 win over Rapid Vienna in the Europa League on Thursday.

Arsenal, on the 51st minute, went behind when the host pounced on a lose ball to go in front.

Partey’s dazzling display on the night was so glaring and was deservedly given the Man-Of-The-Match award after a scintillating display by the former Atletico man.

Paired in midfield with Mohammed Elneny, Partey proceeded to boss the game, demonstrating not only his strength and tackling ability, but his sweet passing as well.

The 27-year-old’s movement on and off the ball played a pivotal role in his side’s comeback win in their first Europa League Match this season away in Austria.

At the end of the first half, Partey had made 43 passes and completed 93% of them. He was successful with all two of his attempted long balls forward.

He had also made three tackles and one interception as Arsenal and Rapid went into the break level.

No other Arsenal player made more tackles or won more aerial duels than Partey in the first half.

Partey joined Arsenal from Atletico Madrid and made his first start for the club after coming from the bench to play in his team’s 1-0 away loss in the Premier League against Manchester City.

The Black Stars deputy captain will be hoping to maintain his impressive performance against Leicester City in the Premier League clash on Saturday.