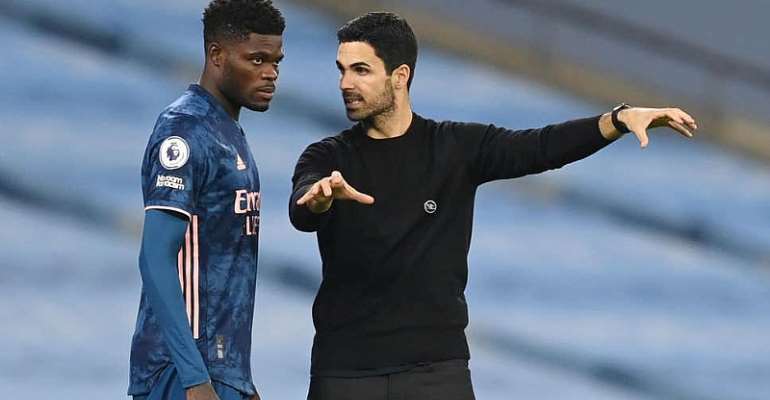 Arsenal manager, Mikel Arteta has heaped praises on Thomas Partey following his outstanding performance for the team in the 2-1 win against Rapid Vienna in the Uefa Europa League on Thursday night.

Lasting the entire duration of the game against Rapid Vienna, the Ghana midfielder put up a good show that proved crucial for the visitors on the matchday.

The highly-rated midfielder bowed out with impressive numbers with statistics provided by SofaScore proving that he was the second-best performer for Arsenal.

The Black Stars poster boy merited a rating of 7.6 on the back of a passing accuracy of 90% as he won 10 of the 13 duels he was involved in.

Giving his verdict on Thomas Partey’s performance, Mikel Arteta has indicated that the midfielder was fantastic for Arsenal on the night.

“I think he held the midfield by himself in the second half when we were a little bit more open and started to take more chances attacking certain spaces with some players. But I think he was fantastic tonight and there is much more to come from him obviously”, the Spanish tactician said in a post-match interview.

On the matchday, Arsenal came from behind to defeat Rapid Vienna 2-1, thanks to second-half goals from defender David Luiz and substitute Pierre-Emerick Aubameyang.

Before the two goals, Taxiarchis Fountas had scored with an assist from Ercan Kara to shoot Rapid Vienna into the lead.