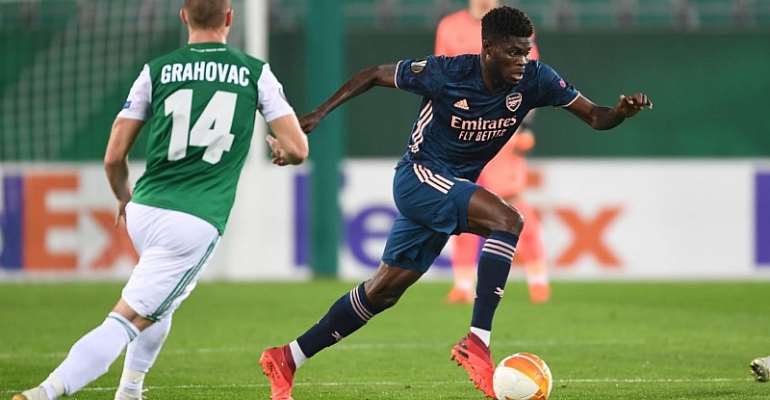 Arsenal boss Mikel Arteta said there is more to come from "fantastic" Thomas Partey after the midfielder's superb full debut in the 2-1 Europa League win at Rapid Vienna.

David Luiz and Pierre-Emerick Aubameyang scored two goals in five second-half minutes after a Bernd Leno mistake had gifted Taxiarchis Fountas the opener to ensure the Gunners began Group B with a victory.

But it was the performance of £45m deadline day signing Partey that stood out. The former Atletico Madrid player was a calm presence in midfield, breaking down attacks and building play with apparently effortless ease.

It was only Partey's second appearance in an Arsenal shirt after a late cameo in the 1-0 defeat by Manchester City in the Premier League at the weekend, and Arteta is excited by what is to come from the Ghana international.

"I think he held the midfield by himself in the second half when we were a little bit more open," said the Arsenal boss.

"He started to take more chances attacking certain spaces with some players.

"I think he was fantastic and there is much more to come from him."

2020 WASSCE Performance Puts Akufo-Addo Ahead Of Mahama – Ad...
44 minutes ago