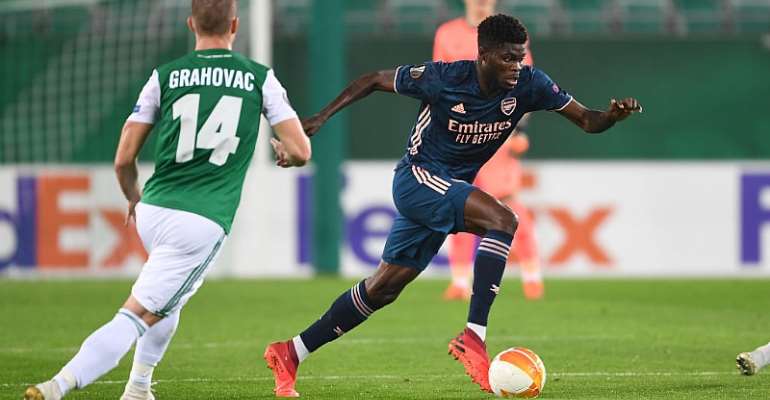 Thomas Partey in action against Rapid Vienna on Thursday night

The English Premier League outfit locked horns with the Austrian side in a Group B encounter of this season’s Europa League competition staged at the Allianz Stadion.

Having marked his debut for Arsenal last Saturday in the defeat at Manchester City, Thomas Partey deservedly earned his first starting role for his new club today.

Lasting the entire duration of the game against Rapid Vienna, the Ghana midfielder put up an outstanding performance that proved crucial for the visitors on the matchday.

Partey hence bowed out with impressive numbers with statistics provided by SofaScore proving that he was the second-best performer for Arsenal.

The Black Stars poster boy merited a rating of 7.6 on the back of a passing accuracy of 90% as he won 10 of the 13 duels he was involved in.

On the matchday, Arsenal came from behind to defeat Rapid Vienna 2-1, thanks to second-half goals from defender David Luiz and substitute Pierre-Emerick Aubameyang.

Before the two goals, Taxiarchis Fountas had scored with an assist from Ercan Kara to shoot Rapid Vienna into the lead.