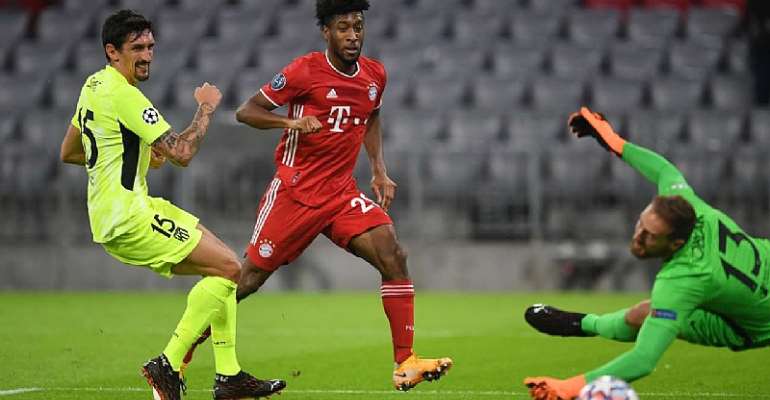 French forward Kingsley Coman hit a brace on Wednesday night to inspire his Bayern Munich outfit to an emphatic 4-0 win against Atletico Madrid in the Uefa Champions League.

The reigning champions of the competition kicked off their defense with a ruthless performance at the Allianz Arena that saw the helpless Spanish opponent returning to Madrid empty-handed.

On the Matchday, Kingsley Coman scored with a fine effort in the 28th minute to power Bayern Munich into the lead after being assisted by the inspirational Joshua Kimmich.

Shortly after, the Frenchman dazzled again and displayed his creativity to set up Leon Goretzka to also find the back of the net to double the lead for the home team.

With the teams heading into the break with the 2 goals in it, the German giants returned to pile on more misery for the visitors.

Midfielder Corentin Tolisson equalizer 6 minutes after the hour-mark before Kingsley Coman netted his second on the 72nd minute to complete his brace while wrapping up a sensational 4-0 win for Bayern Munich against Atletico Madrid.

Having been substituted a minute later after scoring his second, Kingsley Coman bowed out with a rating of 9.2 from top statistics providers SofaScore, surpassing any player that feature for either side.

Up next for Bayern Munich in the Uefa Champions League, the defending champions will play away to Lokomotiv Moscow in the second Group A encounter.