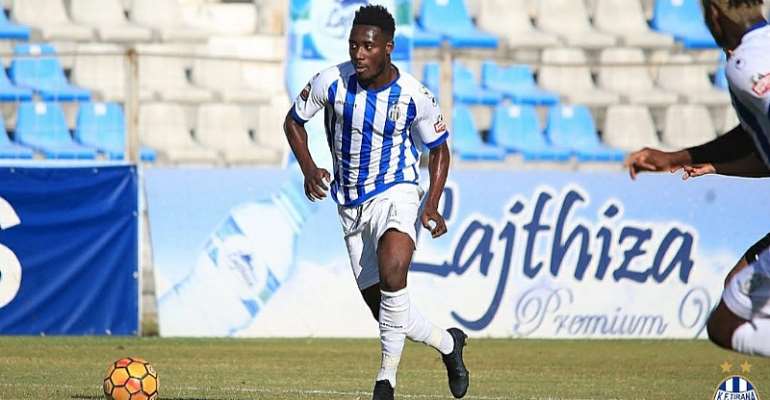 Former Hearts of Oak midfielder Winful Cobbinah following an impressive form in the Albanian top-flight league has been granted full citizenship by the state.

Winful Cobbinah who plies his trade for KF Tirana in the Albania has obtained his passport in just two years after his move to the South-Eastern European country.

His citizenship status comes as a surprise because he has acquired his passport in a very short time.

A report by Ghanasosccernet.com suggests that Cobbinah was granted the citizenship status partly due to the fact that he has been a key figure for TK Tirana, which is the idol club of the President of Albania.

It is also believed that the former Hearts of Oak was granted Albania passport following several calls from a section of the football-loving fans in the country to reward the Ghanaian for his great impact in the league.

It is understood the citizenship status is an attempt by Albania to lure Winful Cobbinah to commit the future of his international football to the South-Eastern European.

Winful Cobbinah joined IF Tirana from Hearts of Oak in 2018 after he was impressive as Ghana won the 2017 WAFU Cup.

However, with the softening of the nationality switch regulations of FIFA, it could be a move by Albania for them to get him to play for them even though Cobbinah has not expressed interest in playing for him.

Cobbinah follows other African football players including the well-known Abraham Alechenu, Charles Ofoye and James Adeniyi who have all received Albanian passport in the past.

The former Hearts of Oak star played an influential role for the side as they clinched the Katergoria Superiorelast season, ending a 11-year top-flight drought with their last success dating back in the 2008/2009 season.

Since joining from Ghanaian giants Hearts of Oak two years ago, Cobbinah has been a mainstay of the side, scoring 10 goals in a combined 58 matches so far and making several assists.