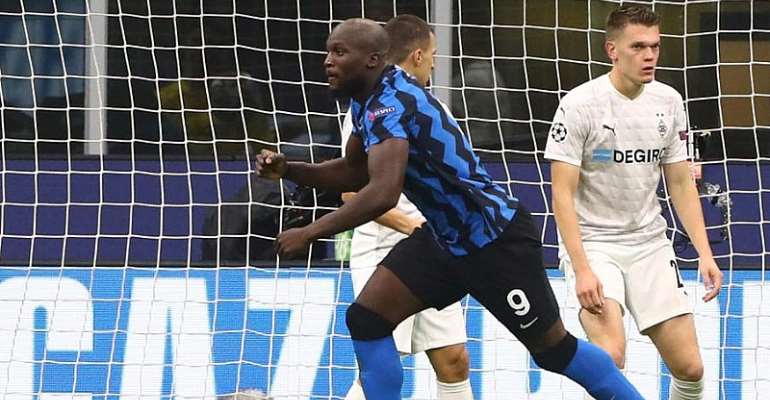 Romelu Lukaku scored twice, including a last-gasp equaliser, to rescue a 2-2 draw for Inter Milan in their Champions League opener against Borussia Moenchengladbach on Wednesday.

Lukaku put Inter ahead after 49 minutes in the San Siro only for the Bundesliga club to hit back with a 63rd-minute Ramy Bensebaini penalty and a Jonas Hofmann strike six minutes from time.

But Lukaku had the last word sending the ball in from close range in the final minute.

Earlier, in the same Group B, Shakhtar Donetsk went top after shocking Real Madrid 3-2 in Spain.

Antonio Conte's depleted Inter side had been looking to bounce back from a 2-1 derby defeat to AC Milan at the weekend, but were struggling with five players missing through coronavirus.

Hakimi joined former three-time Champions League winners Inter from Real Madrid in the summer and had impressed in his opening matches.

Matteo Darmian took the place of the Moroccan international with Dane Christian Eriksen starting behind Lukaku and Alexis Sanchez, who was favoured to start over Lautaro Martinez.

Alessandro Bastoni returned to the group after recovering from the coronavirus, and came off the bench in the second half.

Inter had the best of the first half with Lukaku missing a chance to break through just before the break, connecting with a Sanchez cross, only to send the ball across the face of goal.

Lautaro replaced Sanchez for the second half with the Argentine striker nodding wide, before Lukaku broke through amid a scramble in front of goal.

But Moenchengladbach pulled level from the spot after 63 minutes when an Arturo Vidal foul on Thuram was confirmed after a VAR review.

Bensebaini stepped up to leave Samir Handanovic in the Inter goal with no chance.

Lautaro rattled the post, but it was the Bundesliga side that grabbed the second when Hofmann connected with a Florian Neuhaus cross.

The former two-time Uefa Cup winners thought they had done enough but Lukaku came through with the last-gasp equaliser for his sixth goal in five games this season.