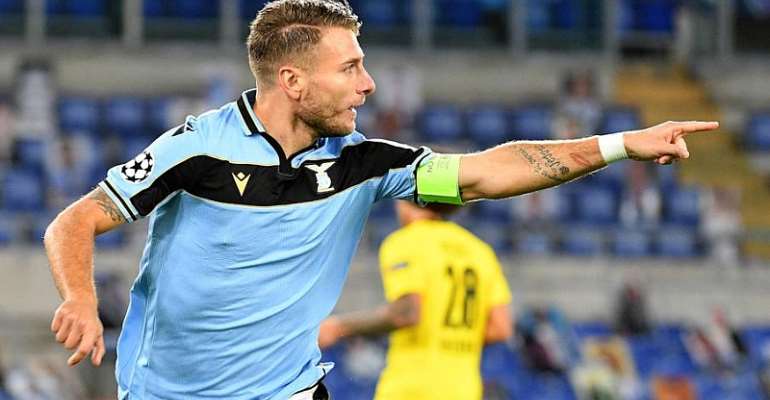 Lazio's Ciro Immobile scored against his former club Borussia Dortmund in a 3-1 home victory marking their return to the Champions League group phase after a 13-year absence on Tuesday.

Their second strike was credited as an own goal by keeper Marwin Hitz while substitute Jean-Daniel Akpa-Akpro got the third as the Italians shrugged off their poor form in the new Serie A season to secure a winning start to their Group F campaign.

Dortmund's Norway striker Erling Haaland kept up his prolific Champions League scoring form with a second-half goal to make it 2-1 but that was to be the German club’s only consolation.

Immobile, who played in the Bundesliga for Dortmund in the 2014-15 season, got Lazio off to an early lead after their pressing forced possession from Dortmund’s new fullback Thomas Meunier. It allowed Joaquin Correa to steal a pass-through to Immobile, who scored from close range in the sixth minute.

It was the fifth Champions League goal for the 30-year-old Italian international, the four previous efforts having been netted in Dortmund colours.

Lazio’s lead was doubled in the 23rd minute when Luiz Felipe, on his return from injury, attacked a corner and got a glancing touch with his head, steering the ball towards the goal though it hit the face of Hitz as it flew in. Uefa later changed credit for the goal from the Brazilian to an own goal.

Dortmund had few opportunities to force a first-half chance but after the break looked much more attacking as Haaland began to power his way through the home defence and look dangerous.

He eventually pulled back a goal in the 71st minute with a powerful left-footed finish from a square pass delivered by American teenage substitute Gio Reyna.

Haaland now has 11 goals in nine appearances in the competition.

But just when Dortmund went in search of parity, a quick counter-attack saw Immobile set up substitute Akpa-Akpro to restore Lazio’s two-goal advantage five minutes after the visitors' goal.

Lazio’s win came in contrast to their domestic form where they have collected a single point from their last three Serie A outings.

Earlier on Tuesday, Belgium’s Club Brugge snatched a stoppage-time winner to beat Zenit St Petersburg 2-1 in Russia in their opener in the group.

Next week Lazio are at Club Brugge while Dortmund host Zenit.