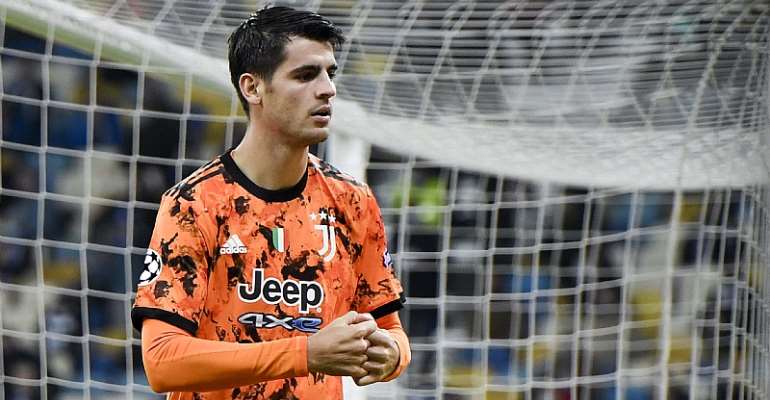 Alvaro Morata struck twice on Tuesday as Juventus made light of Cristiano Ronaldo's absence to get their Champions League campaign off the mark with a 2-0 win at Dynamo Kiev.

Spain's Morata opened the scoring just after the break when he tapped in off a rebound and nodded in a second with six minutes to go to give Juventus three points in Group G which also includes Barcelona and Hungarian club Ferencvaros.

Portugal captain Ronaldo and US midfielder Weston McKennie both missed the trip to the Ukraine after testing positive for coronavirus, with Alex Sandro and Matthijs de Ligt out injured.

But Andrea Pirlo, 41, got his European coaching debut off to a winning start against veteran Dynamo coach Mircea Lucescu who gave the Italian his first Serie A start as a Brescia player 25 years ago.

"One step at a time. It was important to play a solid match compared to Saturday against Crotone," said Pirlo of the 1-1 league draw.

"We managed to try something (in training) on Monday and we were more organised for today."

The Italian champions had little to show for their early domination against the young Ukrainian side with Dynamo goalkeeper Georgiy Bushchan denying early efforts from Federico Chiesa and Dejan Kulusevski.

Juve skipper Giorgio Chiellini also nodded wide before the veteran defender was replaced by Merih Demiral after 18 minutes after limping off clutching his leg.

Morata's first goal came after Bushchan parried Kulusevski's effort, allowing the striker to finish off the rebound, in front of a crowd of 15,000 in the Ukrainian capital.

Paulo Dybala came on for Kulusevski 10 minutes after the break for the Argentine forward's first start this season.

But it was former Chelsea striker Morata who had the final word with a powerful header from a Juan Cuadrado cross which gave him a third goal in a week since moving on loan back to Juventus from Atletico Madrid.