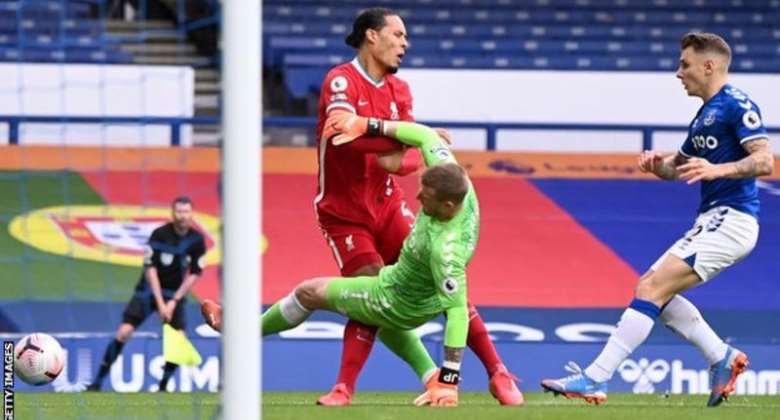 Van Dijk suffered an anterior cruciate ligament injury in the challenge - which went unpunished - and is set to miss at least most of this season.

Wijnaldum said "none of the players slept" after what happened on Saturday.

Manager Jurgen Klopp said his feelings were "similar to my players".

Fabinho looped a cross to the far post which Van Dijk was about to try to control when Pickford came flying out feet-first and trapped the defender's right leg in a scissor-like movement. Van Dijk was immediately in pain.

As the 29-year-old Netherlands centre-back was being treated, the video assistant referee (VAR) noted it was checking for a "possible penalty". In the end, it could not have been a penalty because Van Dijk was offside. Referee Michael Oliver gave a free-kick to Everton, Van Dijk left the pitch and the game carried on.

Pickford did not face retrospective action because the Football Association determined the incident was seen at the time having consulted with the match officials, including VAR.

Late on in the game, which finished 2-2, Toffees forward Richarlison was sent off for a high tackle on Liverpool midfielder Thiago Alcantara.

Wijnaldum, who is also a team-mate of Van Dijk for the Netherlands, said: "Of course we are upset. The way Pickford went in was completely stupid.

"I believe he did not want to injure Virgil the way he injured him.

"In my opinion, they take it too far in the games we play against them. Everyone wants to win the derby, sometimes you go a little over the top, but it was too much - not only his tackle, Richarlison on Thiago was also a nasty one.

"Accidents can happen in football. You can be unlucky and injure someone - but the way they were doing it was completely unacceptable.

"It makes it harder as they do not get punished, in this case Pickford."

As well as being without Van Dijk and Thiago for their Champions League opener against Ajax on Wednesday (20:00 BST kick-off), Liverpool have further selection issues at the back, with defender Joel Matip also missing the trip to Amsterdam.

Midfielder Fabinho should fill in in central defence alongside Joe Gomez, with youngsters Nat Phillips and Rhys Williams included in the squad.

Speaking about Van Dijk's injury, Klopp said in a news conference on Tuesday: "We are still sensitive with the situation, which you are not.

"The first question you ask is: 'What are you doing in the transfer market?' Our vice-captain and the best centre-half in the world is not playing for a long time. We will see how long and we work for solutions for now.

"A couple of days ago, something happened which should not have happened in a football game. It did not happen for the first time and not the last, and I see it similar to my players.

"Both challenges were difficult to accept, let me say it like that.

"Virgil is our boy, a world-class player and we will miss him. Injuries happen in football, but when two players try to challenge for the ball."

Liverpool are refusing to specify how long Van Dijk will be out for until after his operation, which is yet to be arranged.

The Dutchman has been a key figure for the Reds since signing from Southampton for £75m in January 2018.

He played every Premier League game for the club in the past two seasons as Liverpool finished second in 2018-19 before winning their first top-flight title in 30 years in 2019-20.

Klopp added: "In this game, a few things happened together. The referee Michael Oliver, who is an excellent referee usually, did not see it. I don't understand why he did not see it. The VAR forgets the rules.

"It is not that I want players punished, but it is something we agree on. If you do something wrong you have to deal with the consequences.

"Only two people are dealing with it: Virgil and Thiago. And the rest go on.

"We did nothing wrong in the game, nothing wrong since - but we are still the ones who suffer. That does not feel right and it is not easy to deal with these kind of things."