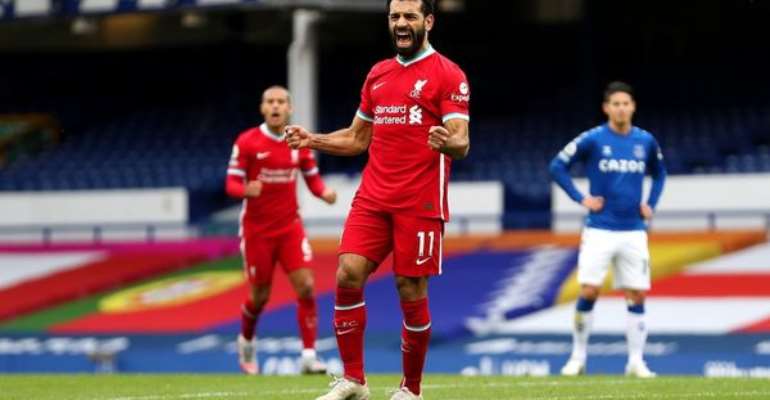 Egypt superstar Mohamed Salah became the third-fastest Liverpool player to reach 100 goals by putting the Reds ahead a second time in a drawn Merseyside thriller against Everton at the weekend.

The 28-year-old, who moved to Anfield from Roma three years ago, is the third quickest goal centurion after Roger Hunt and Jack Parkinson.

SADIO MANE (Liverpool)
He scored his fourth goal in three games as he returned from coronavirus quarantine, but Liverpool had to settle for a controversial draw against Merseyside rivals Everton. Mane had missed two matches following his positive virus test and he made up for lost time with a cool finish from Andrew Robertson’s cross in the third minute at Goodison Park. However, Liverpool twice blew the lead and Jordan Henderson’s last-gasp winner was ruled out for a harsh VAR offside call against Mane.

MOHAMED SALAH (Liverpool)
The Egypt forward reached his 100 goals milestone as the champions drew. Salah fired Liverpool into a 2-1 lead when he met Yerry Mina’s poor clearance with a superb strike into the far corner.

WILFRIED ZAHA (Crystal Palace)
The Ivory Coast forward scored for the first time in three games, but it wasn’t enough to secure victory as Brighton earned a 1-1 draw at Selhurst Park. Zaha struck with a 19th-minute penalty controversially awarded for Tariq Lamptey’s slight push on Michy Batshuayi. Palace were condemned to a third successive game without a win when Alexis Mac Allister drilled home in the 90th minute.

VICTOR OSIMHEN (Napoli)
Nigeria striker Osimhen called for an end to police violence in his home country after scoring his first goal for Napoli. “End Police Brutality in Nigeria,” was handwritten on a white t-shirt held up by the attacker after he netted the fourth goal in a 4-1 Serie A win over Atalanta in Naples.

YANN KARAMOH (Parma)
Ivorian striker Karamoh scored with 20 minutes to go but Parma, missing seven players due to coronavirus, fell 3-2 at Udinese for their third defeat in four games. It was the first league goal this season for 22-year-old Karamoh and just his second since joining the club from Inter Milan in July 2019.

SIMEON NWANKWO (Crotone)
Nigeria striker Simy converted a 12th-minute penalty, his second this season, as promoted Crotone held champions Juventus 1-1 to move off the bottom of the Serie A table. Simy scored past Italy goalkeeping legend Gianluigi Buffon, who was making his 650th Serie A appearance. It was the 12th top-flight goal, and 43rd in total, for 28-year-old Simy in five seasons with Crotone.

EDMOND TAPSOBA (Bayer Leverkusen)
The Burkina Faso international had a lucky escape in his side’s 1-0 win over Mainz after his red card was annulled by the video assistant referee. Sent off for bringing down Karim Onisiwo when the Mainz striker was through on goal, Tapsoba was reprieved when it transpired that Onisiwo had been offside seconds earlier. Tapsoba remained on the pitch, and his side held on for a first league win this season.

KINGSLEY EHIZIBUE (Cologne)
The Nigeria full-back set up Ondrej Duda’s second-half equaliser as Cologne came from behind in a 1-1 draw at home to Eintracht Frankfurt. Ehizibue’s swerving cross from the byline found Duda unmarked in the penalty area, and the Slovak smashed the ball home to give Cologne a first point of the season.

AMADOU HAIDARA (RB Leipzig)
The Mali international was left out of the Leipzig squad for the first time this season after testing positive for the coronavirus.Â Haidara, who had started all three previous Leipzig games, stayed home as his side defended top spot with a 2-0 win at Augsburg. The club said he had not been forced into self-isolation, despite the positive test. “The player is not infectious and so, after a discussion with the health authorities, has not gone into quarantine,” said a Leipzig statement.

TINO KADEWERE (Lyon)
The 24-year-old Zimbabwean striker was on target for Lyon in their 3-2 win at Strasbourg, the club’s first in Ligue 1 since August. Kadewere was the beneficiary of a chance created by captain Memphis Depay in the 12th minute.