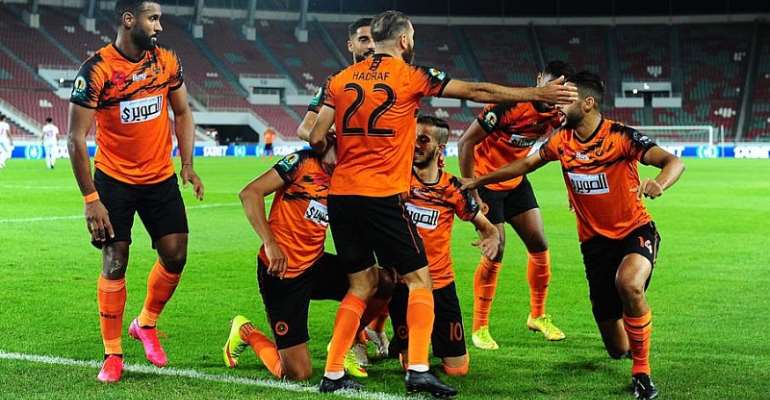 The victory sees the Oranges advance to the Confederation Cup final for the second year running, while their Moroccan rivals, Hassania bowed out of the tournament.

The Oranges pushed for an early goal in the opening stages of the encounter with Mouhssine Iajour causing havoc for the Gazelle de Sousse's defence.

Berkane were awarded a penalty after Iajour was fouled in the box by Soufiane Bouftini in the 18th minute and referee Jean Jacques Ndala pointed to the spot.

Mohamed Aziz then stepped up and beat Hassania captain and goalkeeper Abderrahman El Hoausli from the spot-kick to make it 1-0 to Berkane in the 20th minute.

However, the lead lasted for only 10 minutes as the ball fell kindly for Imad Kimaoui in the box and he fired past Berkane keeper Zouhair Laaroubi to make it 1-1.

The Oranges continued to attack after conceding and they thought they had managed to restore their lead with six minutes left before the halftime break.

Iajour beat El Houasli with a simple header, but the goal was disallowed for offside and the score was 1-1 at the interval.

Berkane were the better side after the restart as they searched for their second goal of the match and they got it just after the hour-mark.

Amine Sadiki was adjudged to have handled the ball in the box and the Oranges were awarded another penalty.

Aziz, who is a goalscoring left-back, stepped up and beat El Houausil for the second time from the spot-kick to make it 2-1 to Berkane in the 61st minute.

Gazelle de Sousse pushed for the equalising goal in the closing stages of the match with coach Mustapha Ouchrif having introduced Saad Morsli and Tamer Seyam.

However, the Oranges stood firm at the back and ultimately, Berkane emerged 2-1 winners and they will face either Egypt's Pyramids or Guinean giants AC Horoya in the final later this month.