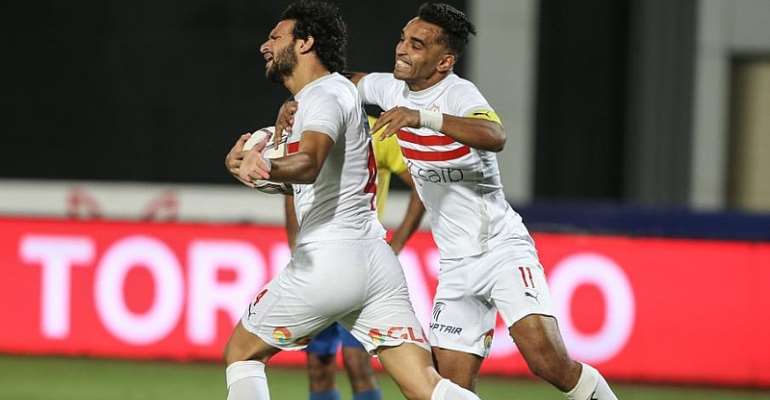 Zamalek claimed a narrow 1-0 away win over Raja Casablanca at Stade Mohammed V on Sunday night to move within touching distance of the CAF Champions League final.

The White Knights claimed the victory in the first-leg, semifinal clash thanks to a first-half strike from Achraf Bencharki and will have the advantage over their Moroccan opponents for next weekend’s return game in Egypt.

After a cagey opening period, Zamalek began to flex their attacking muscle through the likes of Ahmed Zizo, Mostafa Mohamed and Bencharki.

The White Knights made their pressure pay in the 18th minute, with Zizo skipping past a couple of challenges down the right flank before crossing to Bencharki, who steered home a header to give the visitors a 1-0 lead.

Zamalek controlled the tempo of the game after claiming the ascendancy, with Raja attackers such as Soufiane Rahimi and Ben Malango struggling to get a foothold and threaten the away side’s defence.

The Green Eagles finally had a good chance three minutes before the break when Rahimi got in between two markers to meet a cross and head on target, but Zamalek’s Mohamed Abou-Gabal tipped the effort away for a corner kick.

Zamalek led 1-0 at halftime and should have doubled their advantage early in the second stanza, with Bencharki teeing up Youssef Ibrahim, who succeeded only in hitting an effort against a defender with the goalkeeper in no-man’s land.

As the second half progressed, Raja began to turn up the pressure, with ‘keeper Abou-Gabal forced into a couple of sharp saves, while the hosts had a strong claim for a penalty turned down when the ball struck the arm of Zamalek defender Mohamed Abdel-Ghani on 68 minutes.

The hosts continued to boss the game as the final whistle approached and almost levelled the score in injury time when Abdelilah Hafidi saw a deflected effort flash just wide of the target – much to Zamalek’s relief.

The return leg will be held at the Borg El Arab Stadium in Alexandria next Saturday, October 24. The aggregate winners will advance to meet either Al Ahly or Wydad Casablanca in the final on November 6.