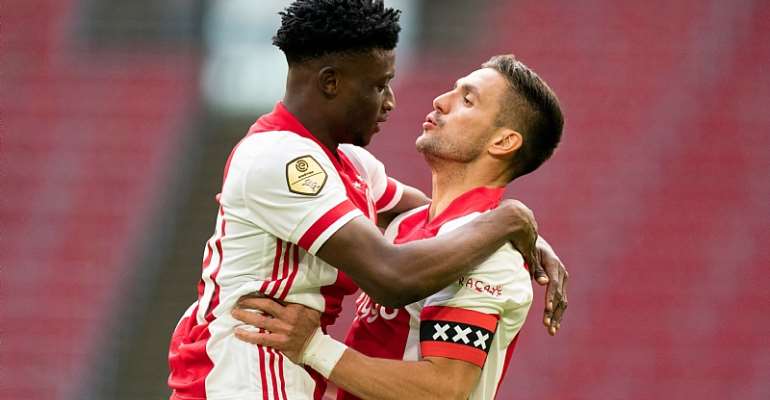 Youngster Mohammed Kudus displayed outstanding form on Sunday afternoon as he scored and provided 2 assists to help Ajax post a 5-1 win over SC Heerenveen in the Dutch Eredivisie.

The exciting forward after recovering from his injury earned a starting role today when his team hosted their Matchday 5 opponent of the Eredivisie at the iconic Johan Cruijff Arena.

Mohammed Kudus added the needed quality to the Ajax team right from the start of the game and went on to provide an assist for Dusan Tadic to score to shoot the home team into the lead after just 5 minutes of play.

Later on the 35th minute, the 20-year old will score with a low drive to give Ajax a 3-goal lead just 7 minutes after Dusan Tadic had scored his second of the afternoon.

In the second half, Mohammed Kudus continued to shine and provided another assist in the 87th minute, setting up fellow summer signing Antony to also get on the scoresheet.

Having lasted the entire duration of the win against SC Heerenveen, the Ghana sensation earned high marks as SofaScore handed him a rating of 8.2 for his efforts.

On the matchday, Davy Klaassen also scored for Ajax while Henk Veerman netted the consolation goal for SC Heerenveen.

Mohammed Kudus, 20, now has his first goal for his new club to complement the 3 assists he has provided in the 3 matches he has played in the Dutch Eredivisie.

Six die in accident at Hemang after car crashed into wrongly...
50 minutes ago