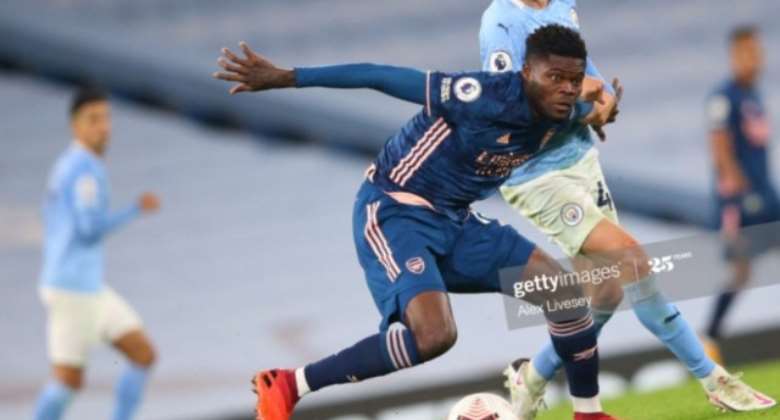 Ghana midfielder Thomas Partey marked his Arsenal debut on Saturday evening when the team suffered a narrow 1-0 defeat at the hands of Manchester City at the Etihad.

The highly-rated midfielder joined the Gunners on transfer deadline day when the club paid off his release clause of 45 million pounds to Spanish club Atletico Madrid.

Due to the international break after his signing, Thomas Partey will not join his teammates until the latter part of last week when he arrived at Arsenal for his formal unveiling.

Today, he was in the run for a starting position for the Londoners when they made the trip to the Etihad to take on Manchester City in the English Premier League.

However, manager Mikel Arteta decided it was best he started from the bench. On the matchday, Thomas Partey was introduced in the 83rd minute to replaced Granit Xhaka.

The 26-year old with 12 minutes on the pitch, displayed decent form and glittered in a few moments to give his new club a hint of what to expect while he adapts to the English Premier League.

Detailed match stats of Thomas Partey against Manchester City below:

At the end of the encounter, a first-half strike from English forward Raheem Sterling powered Manchester City to the 1-0 win as the team run away with all 3 points.

Up next for Arsenal, the team will face off with Rapid Wien in the Europa League on Thursday. New signing Thomas Partey is a strong candidate for a starting role on the matchday.